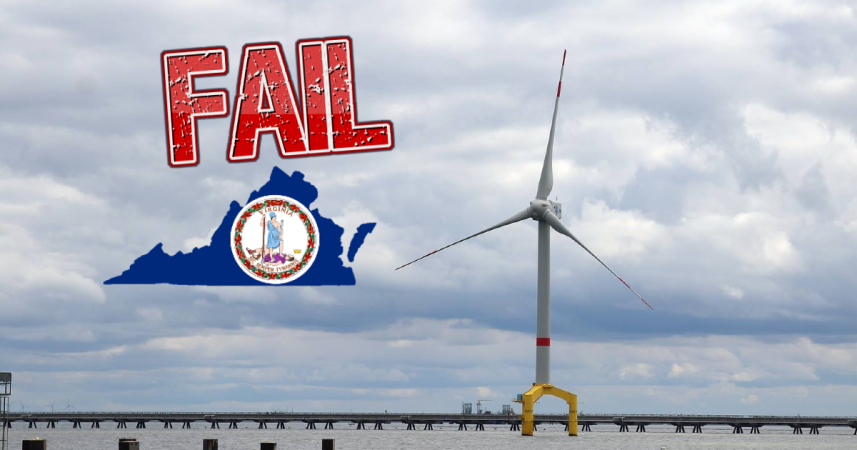 In recent days several proposed offshore wind projects, which unlike Virginia’s are not guaranteed by captive ratepayers, are showing cracks in their pylons.

Multinational developer Avangrid recently told Massachusetts regulators that its proposed 1.2 gigawatt Commonwealth Wind project is no longer economically viable.  It seems to be seeking to renegotiate the power purchase agreement for more money because the electricity price it promised in the contract is being eroded by rising costs and interest rates.

Then the developer of a smaller Massachusetts project, 400 megawatt Mayflower Wind, made a similar announcement.  An EE News Energy Wire story on both can be found here and included this:

Avangrid’s warning — echoed in part days later by Mayflower Wind, the developer of the state’s other upcoming offshore wind project — is the strongest signal yet that a chilling trend on renewable energy projects may migrate into the offshore wind sector.

That was before Monday brought another signal.  New Jersey’s Public Service Enterprise Group (PSEG) announced it is considering pulling out its stake in the 1.1 gigawatt Ocean Wind 1 project.  In that case, the utility does have a 25% equity stake in the project.  Bloomberg reports on that here, stating:

Higher prices and ongoing supply chain constraints are straining the project’s finances, the project’s lawyers said in an Oct. 20 filing.

The Biden Administration’s so-called Inflation Reduction Act shored up already fat subsidies for the industry, but with several conditions.  There is a clear preference for domestic-manufactured content, for example, which might be of no value to these overseas-based contractors.  Labor costs will now be dictated by unions.  The full impact of all that is still unclear.

Here in Virginia, of course, Dominion Energy Virginia’s ratepayers can simply expect to pay more for its planned Coastal Virginia Offshore Wind project.  That one project (2.6 gigawatt) is about the size of the three mentioned above combined, and of course the utility plans a second wave just as large.

This is why the discussion of risk is central to this debate.  In private projects financed with power purchase agreements, the developer’s investors carry most of the risk.  In Dominion’s projects, ratepayers do.

A proposed agreement pending in front of the State Corporation Commission seems to be premised on an expectation that the construction cost will rise to at least $11.3 billion from the previous $9.8 billion, with $1 billion of that to be repaid to the utility by its customers over time (and with annual profit.)  The agreement mentions the possibility of a price tag up to $13.7 billion.  Those numbers were not chosen at random.

An additional $1 billion from ratepayers amortized over decades will substantially increase the projected bill impact of the project, which began to show up on Dominion’s monthly bills in September. (Look on the bill for Rider OSW).  The cost numbers reported earlier will be scrambled, and a new analysis may not appear before the SCC decides.

Avangrid, which has the Spanish firm Iberdrola as its majority owner, is also developer of the proposed Kitty Hawk project.  It will be built off North Carolina’s Outer Banks, but the power cables are going to come ashore in Virginia Beach to connect with the transmission grid.

Yes, but how likely is that?  Once ten or eleven billion has been spent, will the SCC impose that sunk and stranded cost on ratepayers with the prospect of no electricity production or renewable energy credit sales?  In another realm, does the Navy cancel ships when they are 80% built and costs rise?  Not often.

The original condition imposed by the SCC, holding Dominion responsible for any marginal energy costs if the project fails to produce power at 42% capacity, did more for consumers.  It also apparently imposed so much risk on the company that it was threatening to drop out, just like those other developers in other states.

Those other companies are taking steps to protect their shareholders.  Under the original SCC condition, Dominion might have done the same.  Absent that, it doesn’t have to.

A version of this commentary originally appeared on November 4, 2022 in the online Bacon’s Rebellion.  Steve Haner is Senior Fellow with the Thomas Jefferson Institute for Public Policy.  He may be reached at steve@thomasjeffersoninst.org.