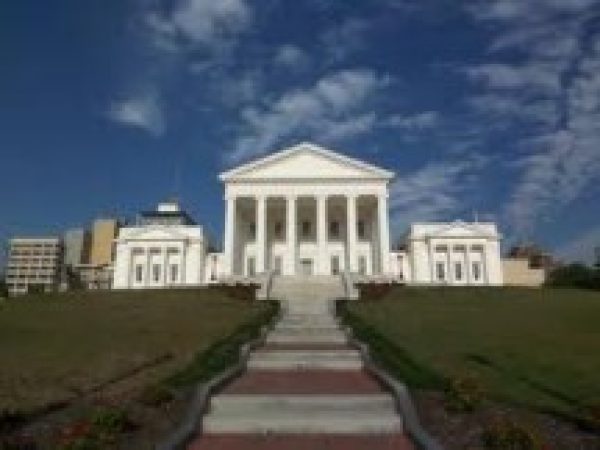 Virginia has largely, although not completely, avoided the trap of public-sector compensation that in many states far exceeds that in the private sector—a contributing factor in excessive spending in those states and at the national level.

A recent analysis for the Thomas Jefferson Institute for Public Policy and other statewide policy organizations, conducted by economists William Even of Miami University and David MacPherson of Trinity University, considered state and local government employees’ pay around the country. It found that the “premium”—the advantage in total compensation for being a public employee rather than a private-sector worker—is 4.95 percent in Virginia. The study used regression analysis and controlled for key factors such as educational attainment, sex, age, race, disability, and work experience. Total compensation included wages, paid time off, health insurance, retiree health coverage, other benefits, and pension costs. (A technical document describing the methodology is available from the Jefferson Institute upon request.)

Not surprisingly, our high-tax neighbor Maryland has a much higher public-sector premium, 14.22 percent. In North Carolina, public employees have an 8.43 percent advantage. Nationwide, the 14.91 percent premium for state and local government employees is similar to Maryland’s. In short, Virginia has done something right in maintaining a much smaller advantage for public-sector over private-sector employees, but according to this analysis, the advantage is still there.

It is worth noting that Virginia and North Carolina are right-to-work states, where employees cannot be required to join unions and organized labor therefore has less clout.

The study found that our public employees are actually at a slight disadvantage when only their pay is considered. Their real earnings in 2010 dollars were roughly 5.5 percent less than pay for comparable people in the private sector. That’s essentially the same as the pay difference for government employees in North Carolina, who make 5.6 percent less than comparable employees in the private sector. Maryland public employees do have an earnings premium, but it’s trivial at less than 1 percent.
What makes public-sector compensation more expensive in all three states is the difference in benefits. While Virginia’s private employers pay an average of $4,936 a year in pension contributions per individual, our state and local governments spend $7,024. The gap is even more striking in Maryland, where pension contributions for government workers average $11,191 a year compared with just $4,525 in the private sector, and is also more striking in North Carolina ($7,657 versus $3,699).

Similarly, employer contributions to health insurance in Virginia, including retirement coverage, are far higher in the public sector. Private employers spend $6,930 a year on average, while Virginia governments spend $10,493. In Maryland and North Carolina, the average health benefit contributions for public employees are $10,997 and $11,271 respectively; their private-sector figures are just slightly higher than ours.

Thus, Virginia should recognize that our public employees are paid a salary/benefits package that is better than a comparable private-sector employee receives. Gradual reductions in benefits are probably justified.

This discussion will continue in the next issue of the Jefferson Policy Journal.