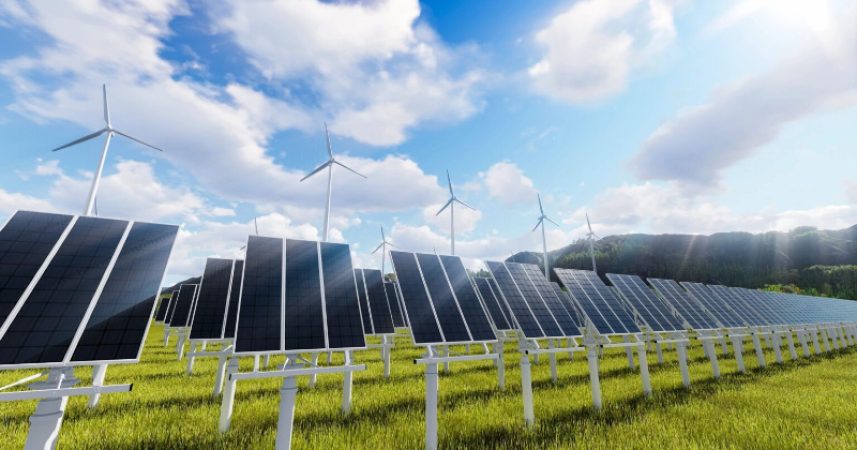 Virginia lost about 2,000 acres of productive farmland per week in 2021, according to data released in February by the U.S. Department of Agriculture.  There are many reasons why farmers sell off their land, including development pressures, lack of interest by younger members of farming families, and the difficulties of turning a profit in the face of ever-changing market and weather conditions.

But there is now a new threat to Virginia’s agricultural base, which has a $70 billion economic impact on the commonwealth annually, according to the Virginia Farm Bureau.

In 2015, there were no utility-sized solar “farms” in Virginia. Now there are 44, with more on the drawing boards.

That’s because in­­ 2020, the Virginia General Assembly passed, and then Gov. Ralph Northam signed, the Virginia Clean Economy Act, which requires the two largest electric utilities in the state, Dominion Energy and Appalachian Power, to become “carbon free” by 2045 and 2050 respectively. The law sparked a flurry of multi-million-dollar investments in solar installations throughout the commonwealth.

But has this rapid rush to install solar panels on thousands of acres of Virginia countryside been wise, given the fact that Virginia’s population is growing, solar facilities require a huge amount of rural land that could be used for agriculture, and due to a variety of factors including drought,  military incursions overseas and supply chain failures, even President Joe Biden has said that the United States is now facing a potential food shortage?

Only three states had more solar energy installations than Virginia in 2021, according to Bill Shobe, energy economist at the University of Virginia. But it’s still a fraction of the total electricity used by Virginians.

According to the U.S. Energy Information Administration, as of January 2022, natural gas accounted for nearly half (48 percent) of all utility-scale electricity generation in Virginia, followed by nuclear (33 percent), coal (10 percent) and renewables (8 percent) – of which solar accounted for only 4 percent. So the real-life effects of a massive switch to solar energy has yet to be felt by most Virginians living in urban and suburban areas.

Not surprisingly, the vast majority of these new solar installations are being built in rural communities, particularly in Southside and Central Virginia where land is more plentiful than money and local public officials often struggle to pay the bills.

According to the Virginia Solar Initiative, a statewide survey released in April by U.Va.’s Weldon Cooper Center and the Virginia Department of Energy,  51 local governmental authorities have been approached for permission to erect large-scale solar installations in their jurisdictions, and 44 have already approved such applications.

The latest was the Charlotte County Board of Supervisors’ approval in July of a conditional use permit to allow a gigantic 877-megawatt solar installation to be erected on 21,000 acres, which will be one of the largest such facilities east of the Mississippi River. Dominion Energy, which plans on purchasing the solar farm from Reston-based Randolph Solar after it’s built, sweetened the deal by promising the county that it would accelerate its $1 million payment for a previously approved solar project.

A 1,330-acre solar “farm” got the green light in King William County, as did a smaller 268-acre solar facility approved by the Henry County Board of Zoning Appeals.

Rural officials are being courted by solar developers, many from out of state, who offer financial incentives if they vote for special use permits to allow these industrial facilities to be built on land zoned for agriculture. In fact, one of the Virgina Solar Initiative survey participants wrote that local leaders “are keenly aware that solar energy production is highly land-consumptive and that solar energy providers want the lower cost farmland with no development improvements” – in other words, land that is already producing food or could quickly be converted to crop production.

“Once the facility is built, it’s paying into the tax base without making any substantial demands on local services,” Shobe told Virginia Public Radio. “For localities rich in land resources, this can be a very substantial contribution.”

But when local officials focus on the short-term financial benefits without thinking about the future ramifications of allowing these industrial power plants on land that is supposed to be reserved for agriculture, they may be trading one form of environmental degradation for another.

For example, Dr. Rattan Lal, Distinguished Professor of Soil Science at Ohio State University, points out that soil sequesters more than three times the amount of carbon locked in all the plants and animals on Earth. Yet construction and maintenance of industrial-size solar facilities prevents the natural process of soil replenishment from occurring.

So ironically, the legislature’s requirement that the largest utilities in Virginia become “carbon free” in less than 25 years means that there will be a lot more carbon-sequestering farmland lost in the commonwealth.

How much? Solar farms require as much as six to eight acres to produce just one megawatt of electricity. Up to 104,000 acres of forest/farmland would have to be sheathed in solar panels made of glass and highly toxic metals like lead and cadmium telluride to produce about 13,000 megawatts of electricity.  And that’s only when the sun shines.

Soil degradation is not the only problem. Denuded landscape is more prone to erosion, meaning that nutrients are more likely to be washed into the watershed and wind up in Chesapeake Bay, which the commonwealth is already spending millions of dollars to prevent. In March, the Virginia Department of Environmental Quality announced that starting in 2025, solar panels would be considered “unconnected impervious areas when performing post-development water quality calculations” of stormwater runoff, which will likely increase the cost of these installations.

Earlier this year, Gov. Glenn Youngkin signed  House Bill 206, which says that if the DEQ finds a potential “significant adverse impact on wildlife, historic resources, prime agricultural soils, or forest lands,” the solar facility in question would be required to submit a mitigation plan for public comment. The bill states that disturbing more than 10 acres of prime agricultural land, 50 acres of contiguous forest, and registered forest land automatically requires a mitigation plan.

These mitigation efforts will raise the price of solar-generated power for Virginia consumers even though the cost of the solar panels themselves, most of which are now made in China, have come down in recent years.

Michael Shellenberger, author of “Apocalypse Never,” told the Thomas Jefferson Institute’s Virginia Energy Consumer Conference last October that solar panels are cheaper now due to multi-billion-dollar subsidies by the Chinese government, which uses dirty coal and forced labor to produce them. He also noted that “there is no plan” to deal with the huge amount of hazardous waste from obsolete solar panels once they have reached the end of their 15-to-25-year life span.

That means that some solar farms erected in Virginia in 2021 will start becoming hazardous waste sites in 2036, even before the Virginia Clean Economy Act’s “carbon free” mandates kick in.

“Once you deal with the cost of the waste, electricity from solar ends up being four times higher than they had anticipated,” Shellenberger, TIME Magazine’s 2008 “Hero of the Environment, pointed out. “I changed my mind about renewables when I understood that they require significantly more land,” he added. “Princeton University just confirmed about 300 times more land on average to generate the same amount of electricity from a wind farm or a solar farm as from a natural gas or nuclear plant.”

Thanks to the General Assembly, Virginia is on track to lose a massive amount of food-growing and carbon-sequestering farmland for an inefficient and intermittent technology that could quadruple electricity prices and create thousands of acres of toxic waste.

Local officials who are thinking about approving special use permits to allow more industrial-sized solar facilities to be built on agricultural land in their jurisdictions owe it to their constituents to tally up all of the potential future costs – especially the loss of irreplaceable farmland – as well as the benefits before signing off on this supposedly “free” form of energy production.

Barbara Hollingsworth is a Visiting Fellow with the Thomas Jefferson Institute and a former editorial page editor with the Fredericksburg Free Lance-Star.  She may be reached at BarbHoll3@gmail.com.