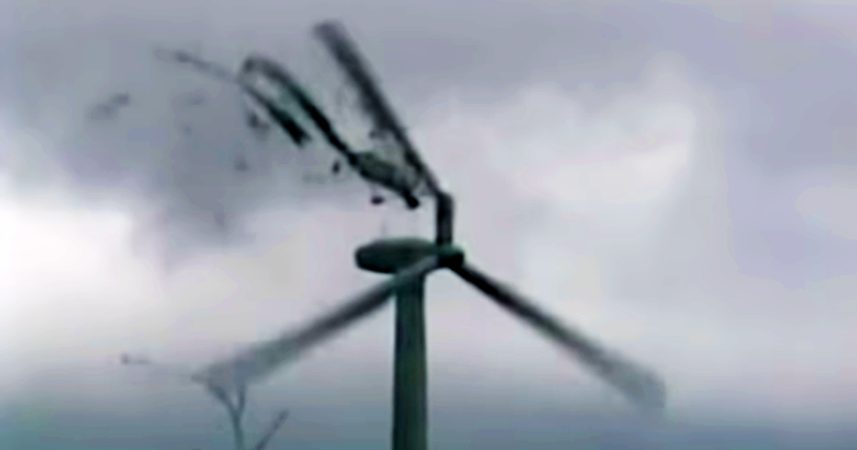 Researchers at the University of Virginia are part of an ongoing effort to redesign wind turbines to be both more efficient and better protected from storm-scale winds, as described in this video you can find on a university website.

What is the problem to be addressed? Says one of the engineers:

As you get these larger wind turbines, your blades end up becoming more flexible and if you’re upwind then when the wind comes in and hits those blades, they can curve backwards and then it can hit that tower and destroy the entire turbine.

You can see an example of that happening on the video. It is not just theory.

So, great idea.  Hurricane resistant turbines with flexible blades facing downwind. Is that what Dominion Energy Virginia is about to build off Virginia’s shores, the cost billed entirely to its captive ratepayers?  Well, no, actually.  It is the old design.  But no problem – it won’t cost the company any money if a storm replicates that damage you see in that video. We customers will pay.

Dominion Energy Virginia’s Coastal Virginia Offshore Wind project is an epic mistake for Virginia.  Yet thanks to the Virginia General Assembly the regulators at the State Corporation Commission are most likely going to approve it because the Assembly stripped them of their traditional oversight role with the 2020 Virginia Clean Economy Act (VCEA).  Virginia’s Republican governor appears to be among the cheerleaders.

The wind project’s application process and subsequent review have developed a large amount of information about the project, but little news coverage, so most Virginians remain clueless about what is coming.   Here are five reasons why the SCC should say no:

First and foremost is the secrecy.  Despite some efforts by Attorney General Jason Miyares, creating a bit more transparency, pages and pages of data – entire reports even – remain under seal and visible only to those who have sworn secrecy.  The data covers known and possible risks that could throw the project off schedule or even cause catastrophic failure.  It also covers some of the economic analysis, leaving outsiders to decide whether to trust the rosy projections from the utility.

What are they hiding?  Does it include discussions of the risk demonstrated on the video?

Second is the ownership structure.  One fact that is on the record is that no other offshore wind project proposed so far in the United States is 100 percent owned by a vertically integrated monopoly with captive ratepayers.  If any of those known or unknown risks kick in the added cost flows down to the 2.5 million Dominion customer accounts in this state.

It could have been a third party building the plant and signing a contract to sell power to the utility.  Then the third party carries the risk of losing revenue if the plant fails to operate as proposed.  There is a similar set up where the utility subsidizes the privately-owned plant by promising to buy the renewable energy credits rather than the electricity, again shedding risk.  Dominion opted for placing the full risk on its ratepayers.

Third, the power isn’t needed, not now and not for decades.  In a wonderfully circular argument, the plant is needed to comply with the 2020 VCEA law, which of course was conceived and written by Dominion’s lawyers and lobbyists.  Eventually, VCEA will force closure of Dominion’s very efficient natural gas generators.  It will make the gas facilities less economically efficient in the meantime, but with them and no turbines Virginia would have plenty of generation available.

The dirty secret on wind and solar is they only work sometimes, but we need power always.  Without the natural gas backup, Dominion cannot meet its load on cloudy, windless days.  Missing from all the current equations are billions of dollars needed for gigawatts of battery backup if the gas plants close.  Which leads to:

Fourth is the cost.  The General Assembly bought the bogus argument that the plant would be “reasonable and prudent” if it only cost 40 percent more than the least efficient kind of natural gas plant, a peaking plant that runs almost never.  If Dominion needs more generation, solar and onshore wind facilities would provide power for less money.   Another gas plant would be better still, but the VCEA stands in the way of that option.

The SCC staff examined and costed out several ways that the advertised construction cost of almost $10 billion could prove too low or the 2027 scheduled completion could be delayed.  Any combination of them would explode Dominion’s future rates.  The SCC staff also raised the specter of the missing battery backup and that related cost.

That is the fifth reason, the prospect of failure, the operational risk.  Dominion is claiming that the 176 turbines will really put out only 40 percent of their advertised 2,600 megawatts.  Even that depends on only minimal maintenance stops and 25 years of perfect operation.  The harsh ocean environment may quickly degrade the efficiency of the machines and the 40 percent capacity factor promise will then fade into history.  A category five hurricane could destroy it in a day (see video above for how.)

Notice that not even mentioned are the likely issues that will arise when time comes to remove the rusted out towers and miles of cable, the impact the project may have on endangered right whales or sea birds, or the major transmission lines that will crisscross Hampton Roads to connect all this.  Litigation could delay the project (at ratepayer expense).

The case to reject this project is overwhelming, which is why the General Assembly made rejecting it impossible.