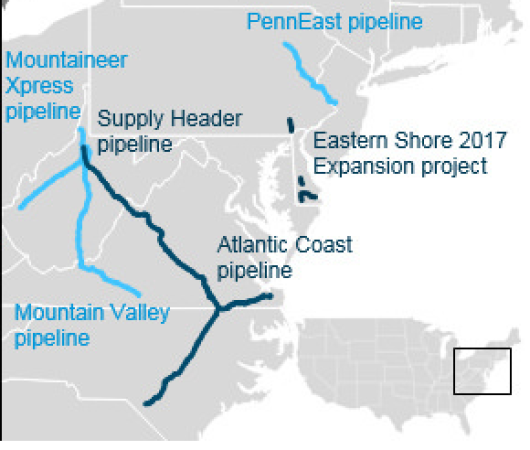 And now, from our “I’ll believe it when I see it” department, comes the expectation that passage of President Joe Biden’s new corporate tax hike and green energy incentives package will be followed by a smooth path to completion for the Mountain Valley Pipeline (MVP) for natural gas.

The topic is everywhere today because Senator Joe Manchin, D-W.Va., included it as a deal point on a summary of what he sees as agreed outcomes from his decision to support the package. But the massive bill does not (and could not) include blanket approval of the pipeline among its provisions.

Instead, there is reportedly a side agreement, and future legislation and administrative actions are expected to smooth federal permitting processes for energy projects, including the fossil fuel projects hated by the climate- catastrophe priesthood. A key element would remove the Fourth Circuit Court of Appeals from hearing the multitude of pipeline lawsuits and move them to the District of Columbia Court of Appeals.

The 303-mile pipeline stretching from gas fields in West Virginia to Chatham, Virginia, where it ties into an existing natural gas trunk line, is largely complete but is still fighting for permits to cross various wetlands and federal properties. Already about four years behind schedule, the developers are asking for another four years to get the job done.

The Wall Street Journal editorial page is skeptical that any such deal will hold once Manchin has actually voted to pass the tax hike and tax credit package, which as a budget reconciliation bill is exempt from the filibuster rules. The editors wrote:

What’s needed is a wholesale reform of environmental laws that fossil-fuel opponents have weaponized. Perhaps they should be forced to pay the costs of their obstruction if project developers prevail, as two pipelines did at the Supreme Court in recent years only to be scrapped by investors amid more lawsuits. The incentives have to change.

Will Democrats agree to legislation that stops their allies’ legal barrage against fossil fuels? Unless they do, Mr. Manchin’s reforms will do as much to save fossil fuels as the League of Nations did to stop World War II.

A second bill dealing with energy regulation would be subject to filibuster, thus needing at least ten Democratic votes along with the 50 Republican votes to pass the Senate. Then there is the House, where Democrats hold a stronger majority and may not dare to inflame the environmentalist voters before the November mid-terms.

As a report in today’s Virginia Mercury makes clear, those who believe natural gas is satanic are struggling to balance their hatred for the MVP project with their lust for the huge tax incentives baked into the bill for future renewable energy projects. But some have taken a strong stance:

Mercury also reports that Virginia Democratic Senator Tim Kaine is open to new legislation on federal permitting, but it includes no information on how he would feel about the deal Manchin is seeking to immediately smooth the MVP’s current path. Even in this current world-wide energy crisis, Kaine is still questioning whether there was or is any need for the pipeline.

Dwayne Yancey at Cardinal News, its region at the heart of the controversy, seems to accept that the deal is done, that Manchin has succeeded in getting the “Biden administration and top congressional Democrats to back the pipeline.” Yancey is into the political side of the story, the trade-offs, but doesn’t see much benefit to Virginia if the MVP is completed.

His column is clearly an effort to sell the deal to MVP opponents. He starts with an early premise that President Biden is not really an opponent of the “fracking” drilling techniques to release massively more natural gas from the ground and seems to blame Biden’s wishy-washy stance as a reason he almost lost. He sees his region as being sacrificed. He writes:

It’s easier to make tough deals involving somebody else’s sacrifice. Would Schumer have been so keen for this deal if the Mountain Valley Pipeline ran through New York? Would Pelosi have gone along if it went through San Francisco? Probably not, right? It’s a lot easier for those at the national level to be more dispassionate about the deal than those who are closer to the actual pipeline. The Washington Post quoted some on the left who seemed OK with the Mountain Valley-Pipeline-for-Manchin’s vote deal. “We must pass the Inflation Reduction Act if we want to get on track to cutting carbon pollution in half by a decade,” said one California-based energy expert. “Without this legislation we don’t have a pathway to get there; with it, we have a fighting chance….”

There is no fighting chance. Carbon emissions will not, repeat not, be cut in half in our lifetimes, let alone a decade. This coming winter will demonstrate to all that reliance on wind and solar will doom a modern economy to failure unless Putin the Merciless relents and turns on the natural gas taps for Europe. More wind and solar will indeed be built in the U.S. if this bill passes, more electric vehicles sold, but despite the sugar high of the taxpayer-financed subsidies, there will still be days when the sun doesn’t shine, the wind doesn’t blow, and those of us with gas furnaces, propane grills and internal combustion vehicles sigh with relief.

As to getting the Biden Administration or Virginia’s key Democrats to back the Mountain Valley Pipeline, I’ll believe that when I see it. Manchin better get that vote on the board first.

A version of this commentary originally appeared August 3, 2022 in the online Bacon’s Rebellion.  Steve Haner is Senior Fellow with the Thomas Jefferson Institute for Public Policy.  He may be reached at Steve@thomasjeffersoninst.org.