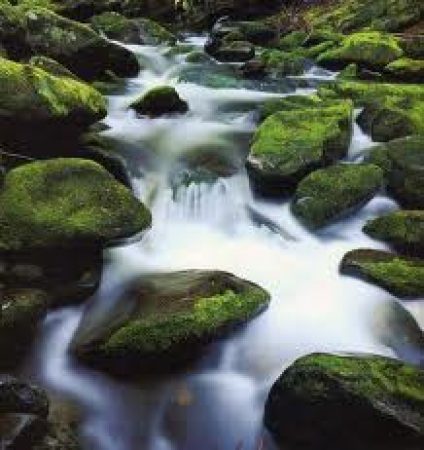 Near the Henrico County government training center, a five-foot pipe spills water into Rocky Branch, a forlorn and forgotten urban creek. When it rains, water from more than 80 acres of roofs and parking lots along Broad Street rushes through the culvert and shoots into the stream at high velocity. Over the years water had scoured the stream bank, creating a gully that cut as deep as 10 feet. Storm water washed tons of sediment every year into the James Riverwater shed, carrying phosphorous, nitrogen and other pollutants with it.

Thanks to a $600,000 stream restoration project, the ugly little gully has been stabilized. It hasn’t regained a pristine state of nature — some of its banks are hardened with large stones, logs and skeins of artificially implanted tree roots — but it isn’t eroding anymore.

Thick with indigenous grass, shrubs and saplings, the banks are returning to woodland. Within a few years, the hand of man will be nearly invisible to passersby on the jogging trail just a few yards away.

Chalk up one small victory in the arduous campaign to clean up the James River and the Chesapeake Bay.

Rocky Branch is one of 48 stream segments that Henrico County identified more than 10 years ago as severely degraded and in need of restoration. To date, the county has repaired two others, one running through the Jamestown Townhouses apartment complex and the other behind Skip with Elementary School.

None of the severely eroded creek beds would have been patched at all had Henrico County not adopted an innovative approach to storm water management. With the imposition of clean-water regulations under the Chesapeake Bay Preservation Act, Henrico required commercial and residential real estate developers to adopt Best Management Practices (BMPs) for controlling storm water run-off. What county officials found, however, was that some BMPs were cost-effective while others were not, explains Jeff W. Perry, engineering & environmental services division manager.

While two-thirds of the BMP projects were effective, removing 85% of the pollutant load, one third, usually associated with smaller subdivisions, accomplished little, eliminating only 11%. Developers would spend $30,000 to $40,000 for a project that might remove a half pound of phosphorous a year yet the water would run into a severely eroded creek or stream where literally tons of sediment, along with phosphorous and other regulated nutrients, washed into the watershed. Says Perry of the mis-allocation of resources: “It’s a real head scratcher.”

The county’s policy innovation was to take the money that developers would have spent on marginally useful BMPs and put it into a special environmental fund. That fund then would pay for the clean-up of streams like Rocky Branch where the environmental benefit would far outweigh that of neighborhood BMPs. “You’ve got X amount of resources,” Perry says. “Why not get the biggest bang for the buck?”

Joe Lerch, director of environmental quality for the Virginia Municipal League, embraces Perry’s logic. By combining the contributions of multiple developers, he says, the county can accomplish far more than individual property owners could on their own. The program has won national recognition. Here inVirginia, Fairfax County has put a similar system into place.

In 1999-2000,Henrico County had hired consultants to walk some 200 miles of creeks and streams across the 234-square mile locality. They documented stream conditions and identified segments that called for restoration. County officials then prioritized those stream segments for remediation, taking into account accessibility, elevation, the number of property owners whose cooperation was necessary and the number of gas and water lines that intersected the stream.

If property owners don’t want the county messing with their stream, there’s not much the county can do, says Perry. Those projects move lower on the priority list. Stream segments with utility lines are demoted as well on the grounds that it is more expensive to work around them when re-grading the creek bed. If a stream segment is remote and difficult to access, it’s a lower priority still. But higher-elevation segments receive preference over those downstream. There’s not much point in patching up a stream if high-velocity water from up-stream undoes the work. Additionally, the county prioritizes work in areas that have already been developed on the logic that it doesn’t make sense to fix a stream where future development might change the stream-flow parameters.

The county has completed three projects and has two in the pipeline. Of the $5 million placed into the environmental fund, $3 million remains unspent. Despite all the work that has gone into documenting the county’s storm water challenges, it takes a remarkable amount of time to execute a project, Perry says. The county must contact landowners and gain their buy-in for a remedial plan, hold public meetings, subject the project to the review of other county departments and gain approval of the Army Corps of Engineers.

One reason the Rocky Branch moved to the top of the list is that the county government owned the property where the creek ran — there were no private property owenrs to contend with. Likewise, the county owned most of the land in the Skipwith Elementary project. The erosion there was sending an estimated 90 tons of sediment, 40 pounds of phosphorous and 320 pounds of nitrogen downstream every year. Besides restoring the stream, that project created an outdoor classroom and educational trail for Skipwith students. 200 acres of drainage.

Another project rejuvenated a creek segment running through the Jamestown Townhouses apartment complex — only one property owner — where erosion from an 80-acre drainage area was threatening building foundations and the integrity of a parking lot.

In each case contractors excavated and re-built the stream beds, employing a variety of techniques to slow the velocity of water and diminish its erosive power. Generally speaking, explains John Newton, the environmental engineer who supervised the three projects, the goal is to mimic shallow, naturally flowing streams. Water that overflows its bed into a gently sloping flood plain dissipates much of the erosive energy.

Other techniques include hardening the creek bed, particularly the outer edges of bins (curves in the stream) where the onrushing water hits with greatest force. In two locations, the Rocky Branch contractors stacked several layers of massive, carefully fitted heavy stones in the manner of an Incan wall. “We prefer to go natural, and not use stone,”Newton says, “but sometimes you need it.”

Another technique is to salvage the roots of trees that have cut down and embed them in the stream banks, creating an organic mesh to hold the soil in place while grasses and shrubs take hold. Restoration designs use tree trunks to redirect the flow of water away from the vulnerable banks, and step pools to absorb energy from falling water. Designers even work in shallow riffles to provide habitat for animal species that don’t like the deeper pools.

Overall, the system is working pretty well, but Perry has his frustrations. You’d think the Army Corp of Engineers would do everything it could to encourage reclamation of eroding streams but it adds a lot of expensive mandates like monitoring the stream for water quality. You know the water quality will be vastly better than it was before, he says. What’s the point in monitoring, he asks. “It takes time and money. We could be doing something else with the resources.”

Perry also concedes that there is a limit to how many stream projects can be funded under the current system. Right now, the county is funding projects that provide the biggest bang for the buck. Future projects may be more complex and incur greater expense for comparable environmental gains. Meanwhile, the slow pace of real estate development has reduced developer contributions to the environmental fund to at trickle, and state and federal regulators are ratcheting up the pressure for Henrico to atone for past environmental sins.

County officials are weighing the pros and cons of setting up a storm water utility like the City ofRichmond’s, which would charge property owners a yearly fee based on the amount of impervious surface on their land. That would generate significant revenues, but taxpayers would not be happy.

While the county ponders which course to pursue, Henrico’s streams and creeks aren’t getting any cleaner. With every rain, storm water erode deeper into stream beds, generating more sediment and pollution. As Perry says, the streams don’t heal themselves.