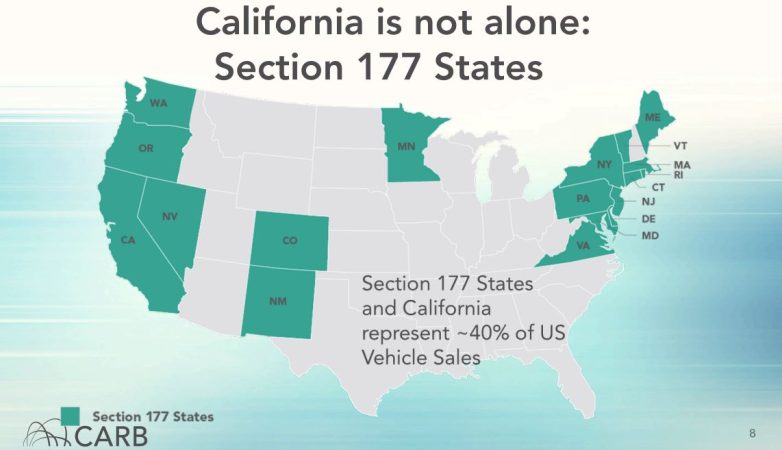 Virginia’s auto industry overlords in California have a new set of proposed mandates for both electric and internal combustion vehicles which, once adopted, will automatically apply here in the Commonwealth.  They do not advance the date for banning the sale of new gasoline and diesel vehicles earlier than 2035 but do increase the incremental targets for percentage of EV sales in earlier years.

The California Air Resources Board regulatory process is well advanced, with a revised draft coming out soon, setting up a second round of comments and a final hearing in August.  Virginia’s dying news media cannot cover this state anymore, so don’t expect coverage of actions in Sacramento.  And, of course, the corporate media is now dominated by editors, writers and owners committed to the war on fossil fuels.

Adding to that, Virginia’s auto dealers themselves (big advertisers and campaign donors) played a huge role in supporting the decision by former Governor Ralph Northam (D) and the then-majority Democrats in the legislature to pass the 2021 bill putting Virginia under California’s control.  A 2022 bill to reverse that passed the House with its new Republican majority, but failed on a party line vote in a Senate committee controlled by Democrats.

A recent CARB PowerPoint slide deck on the proposal includes one showing all the states which have decided to follow California’s rather than federal vehicle regulations, and claims they account for 40% of all U.S. vehicle sales.  Starting with the 2026 model year, 35% of all new vehicle sales would have to be zero emission vehicles in Virginia, not the previous target of 26% under the current regulation.

Given the price differentials and the investment it is making in EV conversion, the auto industry is probably ecstatic.  The CARB claims that 300-mile range battery vehicles will achieve cost parity with the older technology by 2033, and offers illustrations of lower lifetime costs, but the initial sticker prices are likely to remain high and the industry really wants to sell the larger cars, SUVs and light trucks, too.  See what the Ford F-150 version costs.

If you have any skin in this game, the slide deck and an accompanying description of all the related regulatory proposals are important to review.  The depth and breadth of the proposal is impressive.  Responding to known elements of consumer resistance to EVs, the rules dive into charging technology, battery life and labeling, and maintenance and warranty requirements.

One goal is to maintain 75-80% of the initial range of the vehicles for their whole useful life, an admission, apparently, that many of the vehicles now being sold lose substantial range over time.  That doesn’t happen to a well-maintained internal combustion engine.

Plug-in hybrids will have to go at least 50 miles on a charge (they don’t now?).  And, recognizing that internal combustion vehicles will remain on the road for decades, California will impose new fleet standards on them and seek to reduce aggressive driving and cold starts, impose new design standards to prevent evaporation of fuel, and in general remake the industry to its liking.

Starting in 2025, the fleet fuel economy requirements will be calculated with EV’s removed from the equation, and they are totally disregarded from the calculation after 2029.  That will force changes with the internal combustion vehicles still being sold.

Even the towing industry is in for some changes.

The claim is that adopting this will reduce greenhouse gas emissions by 50% by 2040, which is conceivable only if the claim applies solely to motor vehicle emissions.  The slide also shows vehicle greenhouse gas (GHG) emissions going down about 20% in that period if these regulations are not imposed.  The regulations have even less impact on vehicle nitrous oxide (NOx) emissions, also dropping on their own.

There is an environmental justice component, “to reward direct automaker action.”  Plans include discounted EVs for community programs, lower retail prices, and more used EV’s being directed to participating dealerships.  Whether those elements of California’s plan will also apply in Virginia is not clear.  If they are tied into the carrot and stick methods California uses to manage dealer and automaker behavior, it is likely they will.

The 2021 General Assembly majority completely surrendered (some might suspect sold) the sovereignty of their constituents.  If they didn’t anticipate California was just getting started and would double down, they should have.  Bowing under federal regulations is one thing, as Virginians get to vote for members of Congress and the President.  No one in Virginia votes for California’s legislators or governor (or can sign a California initiative and referendum petition).

But we do vote on the Virginia legislature again in 16 months.

A version of this commentary was originally published June 21, 2022 in the online Bacon’s Rebellion. Stephen D. Haner is Senior Fellow with the Thomas Jefferson Institute for Public Policy.  He may be reached at steve@thomasjeffersoninst.org.

Soon after a group of opponents to proposed East Coast offshore wind projects hired a law firm with environmental regulation expertise, the federal Bureau of Ocean Energy Management (BOEM) announced a new plan to protect North Atlantic Right Whales and put it out for public comment. The opponents, with Thomas Jefferson Institute for Public Policy as part of […]

Nonprofit hospitals in low-income neighborhoods should be the backbone of the American safety net system for low-income people who lack insurance. Instead, thanks to a federal program called 340B, many nonprofit hospitals have made maximizing revenue their primary goal, not providing charity care. Thanks to a New York Times investigation, Richmond Community Hospital has become the starkest example of a […]

Advocates made their case Monday for a proposed settlement that offers Virginia consumers some protection from construction cost overruns on Dominion Energy Virginia’s proposed offshore wind project. Not everybody said it was superior to an earlier proposal that protected consumers from future operational failures, but all saw it as unlikely to kill the project. The […]

Inflation is eroding the value of each dollar earned by Virginians, making it harder for them to afford decent housing, put food on the table and educate their children. But what many Virginians don’t know is that they have also been paying more in state income taxes while their real income has declined because the […]