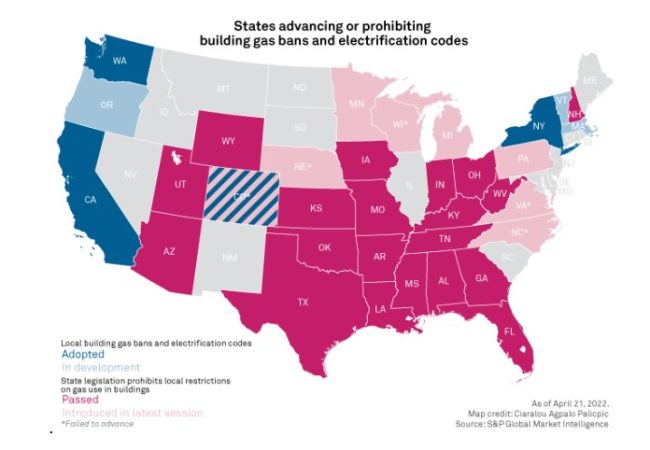 Legislation to enshrine the right to use natural gas and propane in Virginia law, a repeat of a failed effort from 2022, cleared a House of Delegates committee Tuesday.  The ultimate showdown will come not in the Republican-controlled House but in the Democrat-controlled Senate, where the effort hit a wall last year.

“The General Assembly and not the localities should be making the decision on whether or not to ban fuel choices,” said Delegate Terry Kilgore, R-Gate City, before joining 11 other Republicans in voting to report House Bill 1783 to the full House.  Every Democrat present voted no, many stating they think local governments should have the power to prohibit natural gas or gas appliances.

The 2022 bill emerged from a House-Senate conference committee as just a shell, merely adding some notice requirements before a local government takes steps to close its own government-owned gas utility.  That is what Richmond City Council voted to make its ultimate goal about 18 months ago – the closure of Richmond Gas Works.

Since last year, additional local governments around the United States have taken further concrete steps to prohibit the use of gas in new construction, both commercial and residential. They are also moving to require that gas appliances that need to be replaced be replaced with electric versions.  Even if done over time, the conversions will be expensive, tens of thousands of dollars in households with several gas appliances.

But it was the recent moves taken by President Joe Biden’s Consumer Product Safety Council to propose a nationwide ban on gas stoves that finally sparked major national media attention, and no little public outrage. The Biden Administration has since sought to backtrack and dissemble.  Don’t believe it.  Banning any use of natural gas is the ultimate goal.

Environmental groups testifying against the bill Tuesday stressed the impossibility of reaching the widespread state, local or national goals of zero fossil fuel emissions before mid-century unless residential and business fossil fuels are also eliminated.  No one was seeking to deny that banning gas is the outcome sought and the only question is how and by when.

For more information and concrete steps to help protect gas from prohibition, readers should visit the website for a coalition of bill supporters. The Thomas Jefferson Institute for Public Policy is part of the coalition. The full membership list can be found on this information sheet on the bill prepared by the coalition. It includes the Virginia Chamber of Commerce and the Virginia Manufacturers Association.

House Bill 1783 seems a bit more direct in its language than the 2022 version. Here is the key section:

D. No public entity shall enact an ordinance or resolution or promulgate or impose any building code, contractual provision, or other requirement that limits, prohibits, has the effect of prohibiting, or prevents residential, commercial, or industrial consumers within their boundaries from acquiring or using the following:

4. Non-utility gas service in accordance with § 56-265.4:6 and nonjurisdictional propane service.

E. No public entity requiring the issuance of a building permit shall deny a permit application based solely on the utility provider proposed to serve the project….

Brett Vassey of the Virginia Manufacturers Association reminded the committee members that natural gas is not just a building fuel, but also a major ingredient in key industrial products, including fertilizer.  One opponent of the bill later claimed industrial uses were not the target but should Richmond Gas Works close entirely multiple area manufacturing facilities would be cut off.

This bill would not prohibit the city from closing its own operation, but it probably would make it much easier for some other entity – likely an existing major provider – to take over and serve Richmond Gas Works’ customers.

Compared to last year, the coalition of supporters is larger and more willing to stand up, as demonstrated in the meeting Tuesday. It is rare when the proponents of preserving fossil fuels outnumber the opponents at the podium. But the ultimate success or failure of the bill will likely depend on a wave of support from the general public. Here’s the website to make that easy again.

Should the bill become law Virginia would join about 20 other states in taking this action.

Stephen D. Haner is Senior Fellow for State and Local Tax Policy at the Thomas Jefferson Institute for Public Policy.He may be reached at steve@thomasjeffersoninst.org.