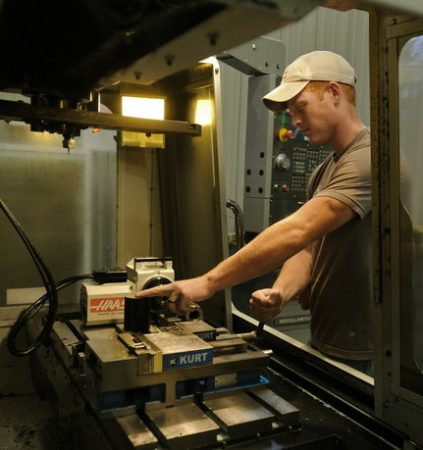 Virginia Manufacturing on the Rise

(Reprinted from the Richmond Times Dispatch)

The manufacturing sector in Virginia added about 2,000 jobs in February and March.

However, the manufacturing sector declined almost continuously since 1990 and shed a total of 164,000 jobs in Virginia since then. Those losses caused even more jobs to be eliminated as manufacturers weren’t buying as much raw materials.

Shipbuilding is leading the current expansion in the state with more than 1,000 jobs added in 2011. Other transportation equipment manufacturers, such as those related to motor vehicles and railroads, collectively have added nearly a thousand more jobs.

Several global and national trends give reasons for optimism that the upward trend will continue through 2012 and beyond.
The rising labor costs in China coupled with steady and impressive productivity gains in the United States are increasingly tilting the balance in favor of expanding manufacturing operations domestically rather than aboard.

Energy prices are a key input in the manufacturing process.

The shale deposits in the Midwest and South have ushered in a period of low natural gas prices.

These low natural gas prices likely will persist for several years to come and have already resulted in low-cost, natural gas-based electricity production, which results in a significant tailwind for U.S. manufacturers.

It is likely that many Virginia manufacturers have not yet fully realized the long-run opportunities possible under the prospect of several years, if not a decade or more, of low natural gas prices.

The reemergence of manufacturing across Virginia creates a need for several skilled positions including engineers, machinists and welders.

In addition to the occupations that will increase in numbers because of the expansion, many positions will require hiring to replace the numerous pending retirements in Virginia’s aging manufacturing workforce.

This manufacturing revival, however, is predicated on the avoidance of potential headwinds in the national expansion. These risks include a prolonged downturn in Europe and weak growth in Asia.

While these risks are present, they have receded in the past few months and the U.S. economy has continued to slowly but steadily grow.

Meanwhile, Virginia can build on its strong manufacturing legacy, reap the rewards of natural gas reserves, and leverage its education system to realize the benefits of America’s budding manufacturing renaissance.