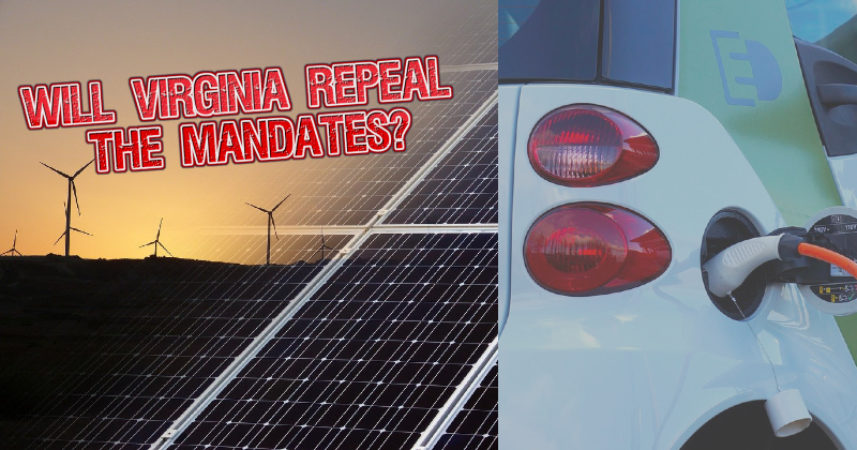 Virginia’s House of Delegates Republicans have passed a series of bills retreating from Virginia’s rush toward a fossil-fuel free future, but they were party-line votes and Democrats in the Virginia Senate, who hold a majority on that side, may promptly kill them all.

Two bills aimed at repealing or amending the 2020 Virginia Clean Economy Act (VCEA) were also opposed in testimony by Virginia’s major electric utilities, who are heavily investing in the mandated renewable energy assets, including a planned 179 turbine offshore wind facility planned by Dominion Energy Virginia.  Various environmental groups were unified and vocal in their opposition to the bills.

But the utility opposition expressed in the House Committee on Commerce and Energy did not stop the bills.  On the more comprehensive proposal two senior Republicans did choose not to vote in committee.  Once House Bill 118 got to the full House, however, both cast aye votes.  One of them had voted in favor of the VCEA two years ago, the only Republican delegate to do so.

On the Senate side, the utility opposition is likely to stiffen.  The committee likely to hear all or most of the bills is split between 12 Democrats and 3 Republicans, and two of those Republicans have already voted to kill (“pass by indefinitely”) another measure written to amend the VCEA and give the State Corporation Commission authority to reject the renewable projects.

There was very little debate on the House side and no legislative maneuvering as the Republicans went on record dismantling the net-zero emissions vision that Democrats imposed when they had control in 2020 and 2021.

None of the bills have received any public discussion, let alone support, from Governor Glenn Youngkin (R) or members of his administration.  The only element of his Day One agenda touched upon by these bills is ending Virginia’s participation in the Regional Greenhouse Gas Initiative.  There are other paths besides legislation to drop out of RGGI and end the related carbon tax.

Youngkin would likely be happy to sign House Bill 1301, a direct repeal of RGGI.  The same goal is accomplished in House Bill 118, but that legislation goes much farther and repeals all of VCEA as well.  Its passage was highlighted on the Republican House Caucus list of “promises kept” issued on Tuesday..

The argument against House Bill 118 on the floor fell to Delegate Richard “Rip” Sullivan, D-Arlington, who claimed its passage and the coming solar and wind dependence are major economic assets to the Commonwealth. “Jobs and businesses are pouring into Virginia,” he said. Certainly jobs for installers will explode, during installation, and there is one turbine blade assembly plant planned for Hampton Roads to support the offshore wind construction.

Drawing far less attention on the floor was a bill that passed the day before, House Bill 73, which actually received one vote from a Democrat. It leaves most of the VCEA intact but removes the specific mandates of how much wind and solar must be built, and by when, and restores the State Corporation Commission authority to rule on need, reasonableness and prudence.  Those standard tests were overridden by the VCEA as passed.

Many Democrats have at least given lip service to restoring the SCC’s independent review to protect consumers but missed this chance to put that position into action.

Two House Democrats are on record voting for House Bill 1257, which establishes in law a right to use natural gas if it is available. It was filed in response to a move by the City of Richmond, copying a national trend, threatening to close down its municipally-run gas utility.  Under the pending bill Richmond would have to seek a buyer for the operation instead.

But the bill is broader than that, prohibiting local ordinances against new gas connections and reaching to non-utility uses of natural gas.  Eliminating natural gas from electricity generation is only part of the net-zero vision, which extends to an outright ban on the energy source.  Nay votes on the bill can and will be portrayed as votes to kill natural gas period.

Finally, the House Republicans also voted as a block to reverse a recent regulation adopted by the Air Pollution Control Board and signed by previous Governor Ralph Northam (D.) Dubbed by supporters as the Clean Car Rule, it would tie Virginia’s market for new vehicles to rules promulgated by the California Air Resources Board.

House Bill 1267 (no Democrat support for this one) would allow the air board to reconsider such a regulation.  But this time it would have to do a full regulatory review and allow public comment, short-circuited in earlier legislation.  And it would move the timeline for Virginia’s alignment to the California rules to no earlier than 2029.  California is planning to ban the sale of any new internal combustion or hybrid cars and small trucks by 2035.  Virginia’s auto dealers lobby cheered the regulation and is opposing this bill.

Democrats, confident public opinion is on their side, are dug in, although polling data suggests voters stand on the side of the GOP’s legislators.  The State Senate majority is likely to confirm its desire to prohibit new gasoline or diesel cars, prohibit natural gas stoves and furnaces, impose ever higher carbon taxes on electricity and then close down all fossil fuel generation. The deadlines are always way past the next election or even the end of their careers.