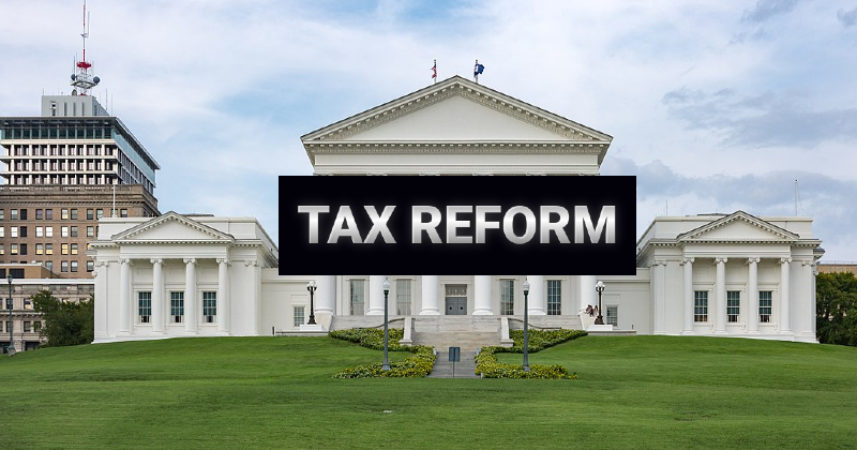 The argument now dividing the General Assembly on partisan lines is not whether to cut the state income tax, but for whom. The House of Delegates goes big with a broad tax cut that brings Virginia into line with other states, but the Senate only wants small changes aimed at smaller groups of taxpayers.

More than 80 percent of the 4.1 million state tax returns filed in Virginia take the standard deduction, currently set at $9,000 for a married couple.  In general, the 3.4 million returns represent the middle and working class, with the poorest Virginians not filing any tax return and many of the wealthiest using itemized deductions.

Increasing the standard deduction by 100%, to $18,000 for that married couple, is a benefit aimed at that large group in the middle, which pays the vast majority of income taxes. They are at the center of the legislative struggle now underway between the Virginia House of Delegates, which supports the increase, and the Virginia Senate, which does not. The controlling majority in the House is Republican and in the Senate it is Democratic.

The Virginia Senate has instead approved a state income tax reduction that applies only to the lowest and lower middle income groups, those eligible for something called the Earned Income Tax Credit.  It has also endorsed a new tax subtraction for military retiree pay, passing in both chambers.

Two years ago they jointly projected $46.4 billion in state General Fund revenue for the two year budget.  After accounting for the doubled standard deduction and several other tax changes, the House is still projecting a 26% increase for the next two years, to $58.3 billion.  The Senate, offering fewer changes to the tax rules, expects a 33% increase, to $61.7 billion.

About two-thirds of the $3.4 billion revenue gap between House and Senate is the standard deduction change.

The Senate considers the House’s 26% increase in revenue and spending not adequate to the state’s needs.  Activists inside and outside the legislature are busy painting the House’s proposal, despite its growth of $11.9 billion, as a series of cuts, reductions, “defunding” even.

A university poll getting widespread attention this week from a news media hostile to Youngkin implied that the House budget, 26% larger than two years ago, leaves education, public safety and social services “underfunded.”

The tax policy differences will need to be reconciled in about two weeks, when the Assembly is set to end.  The playing field will be the conference committee negotiations over the budget, and perhaps over the House bill that raises the standard deduction.  The Senate committee changed the Earned Income Tax Credit with a bill embedded in the budget document.

The increased standard deduction was a campaign promise by Governor Glenn Youngkin but is not a new idea. It has been adjusted up several times over the years.  Most states that have personal income taxes allow a standard deduction higher than Virginia’s, and the federal amount is $25,100 for that same married couple.

Advocates for low income citizens are correct that if a worker pays no income tax because they fall below the filing thresholds or EITC eliminates their tax liability, then increasing the standard deduction is of no value to them.  That is likely a few hundred thousand Virginia households.  Make the EITC into a refundable program, meaning any credit not used to cancel taxes becomes a payment, and then those folks come out ahead.

As an example, a married couple with $30,000 in income owes no income tax because of the EITC. Make that refundable and they also get a check from the state for $339.  (The federal EITC is refundable, too.) Couples with children earning over $50,000 would see an EITC refund payment, although as income rises, the amount shrinks toward zero.

Here’s something most don’t mention.  The two approaches are not mutually exclusive.  The General Assembly could do both, double the standard deduction and turn the EITC into a refundable benefit.  The EITC change only reduces revenues about $200 million more per year.  If that is how to get to yes on the standard deduction, it should be considered.

Both the Senate and the House have approved one-time modest cash rebates to individuals who paid income tax for last year.  Those are not lasting tax changes, also provide no benefit to those who paid no tax, and also go to richer taxpayers who used itemized deductions.  Reconsidering that might be another path to yes.

Something is going to have to give to reach a compromise. When the smoke clears the standard deduction increase is the most important element, the income tax provision of broadest benefit, and should be adopted.

«
Repeal of VCEA, RGGI, EV Mandates Pass House, Face Hostile Senate»
Activists throughout the country want to ban the use of natural gas, even in homes.