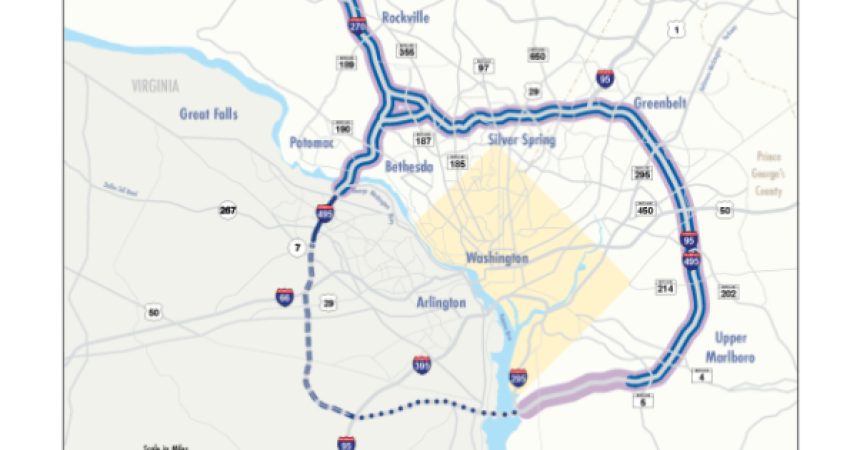 Last month, the Maryland Department of Transportation (MDOT), its State Highway Administration (SHA), and the Maryland Transportation Authority (MTA) selected Accelerate Maryland Partners LLC as the public-private partnership (P3) developer/operator for Phase 1 of the $11 billion I-495 and I-270 managed lanes project. The team is led by equity providers Transurban and Macquarie, with Dewberry Engineering and Stantec Consulting as designers.

Accelerate Maryland Partners had the highest-ranked financial proposal. The company also offered to pay a $145 million development rights fee and agreed to a $54.3 million limit on what it will be paid during predevelopment. (Under “predevelopment,” they will work with MDOT to fine-tune the design, prior to negotiating the 50-year concession agreement.) The team also proposed a higher rate of return on its equity investment in exchange for taking greater construction cost risk, reducing the state’s risk in the project.

Transurban and Macquarie both have proven P3 track records in the region. Transurban financed, developed, and operates the managed lanes on I-95, I-395, and I-495. Macquarie was half of the P3 team that did likewise for the Elizabeth River Tunnels project. Both companies have delivered transportation megaprojects on time. And both have the experience to manage any unanticipated project hurdles.

Much of the opposition to the project has suggested that the state should be investing in mass transit, not roadways. Yet, a rail line along the I-270 and I-495 corridor would cost state taxpayers billions of dollars and need ongoing taxpayer operating subsidies. By contrast, the managed lanes are expected to be paid for only by those who choose to use them.

The project will also create a new transit option for the 272,000 workers who commute into Fairfax County, Virginia, each day, many of them from Montgomery County, Maryland. These workers currently have no viable transit option and can only get to work by driving. The consortium is making a commitment to transit in the area, providing at least $300 million for bus services that can use the new managed lanes, as well as $5 million for Vision Zero improvements and bicycle and pedestrian connections. Managed lanes provide a virtual exclusive busway, in which buses can bypass congestion for faster and more reliable trips. Several different agencies including the Washington Metropolitan Area Transit Authority (WMATA), Montgomery County’s Ride On, and the Fairfax Connector bus service could offer transit service using the new lanes.

The next steps for the project are review and approval by the Maryland Transportation Authority board later this month, a 30-day review by Maryland’s comptroller, treasurer, and the legislature’s budget committees, with final approval hoped for by May 2021. MDOT, SHA, and the Federal Highway Administration are finishing up the Environmental Impact Study in parallel with the team’s pre-development work.

Unfortunately, some environmental groups are still seeking to stop the project. The Maryland Sierra Club argues that the project has serious, negative environmental effects. The group commissioned a study that argued that the managed lanes will actually make congestion worse by shifting traffic from shoulder to peak hours, that managed lanes are an inefficient use of infrastructure, and that induced demand will occur.

While some traffic may shift from the shoulder hours to the peak, this is an economic benefit to the region. Those travelers would then be commuting at a more convenient time for them. Since the managed lanes provide a virtual exclusive busway and give commuters who need a reliable, guaranteed travel time a new option, they are hardly inefficient. Finally, tolling helps reduce induced demand by ensuring commuters pay the full cost of their trip.

But the Maryland Transit Opportunities Coalition argues that the toll lanes are unaffordable. The group uses a worst-case model to argue that drivers will pay “up to $49” to travel from Frederick to Shady Grove at the height of the morning peak travel periods, despite the state’s estimate of an average toll rate of $4-to-$5 for the same distance. Whatever the highest toll is, it will be paid by only a small fraction of commuters during the peak of the peak periods. The coalition, which advocates building more rail lines, including a Southern Maryland light rail project and an extension of the MARC train to western Maryland, fails to mention the likely new bus service option in the managed lanes. The coalition also claims that its rail expansion would be cheaper than the managed lanes, ignoring the fact that drivers who use the toll lanes would be the people paying for the toll lanes. In contrast, all taxpayers would end up paying for most of the cost of the rail expansions.

There are also some opponents in the Maryland legislature. Their bills, HB 67 and SB 843, do not accurately reflect the terms of the P3 project. They would require duplicative environmental studies. Worse, they would require any toll changes to be subjected to a public hearing. Managed lanes are effective because tolls are allowed to increase or decrease based on demand and congestion. Requiring a public hearing to change the tolls would undermine the congestion relief, which is the primary benefit of priced managed lanes. Finally, a bill would require a monorail feasibility study along I-270, which has nothing to do with the project itself.

Maryland DOT has ensured that the managed lanes include dedicated funding for mass transit, environmental remediation, a pedestrian path, and bike lanes over the new American Legion Bridge. The growing Washington, DC, region needs additional roadway capacity, and it is past time for opponents to acknowledge this fact.

A version of this commentary originally appeared on March 4 in the online Surface Transportation Innovations Newsletter.