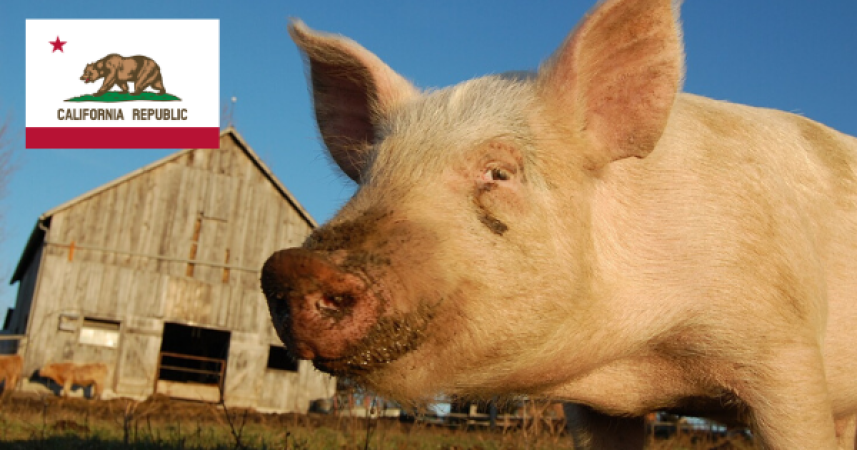 The National Pork Producers Council (NPPC) and the American Farm Bureau Federation (AFBF) were defeated again, as was all of American agriculture, by the state of California defending its Proposition 12 laws on animal housing.

The two trade groups alleged that California’s Proposition 12 violates the Commerce Clause because it reaches outside the state of California and imposes substantial burdens on interstate commerce. The plaintiffs sought an injunction against the enforcement of Proposition 12 concerning pork.

NPPC and AFBF said these requirements will “…impose costly mandates on producers that interfere with commerce among the states and impose costs on pork producers that will ultimately increase costs for American consumers.”

The Court dismissed the plaintiffs’ complaint, declaring they had failed to state a claim upon which relief could be granted. The U.S. District Court judge even granted a motion for judgment on the pleadings because the plaintiffs were entitled to no legal remedy.
The district court relied heavily on U.S. Supreme Court authority. It said California’s Proposition 12 did not discriminate against interstate commerce and did not directly regulate extra-territorial conduct. (Nonsense!)

The Court also indicated that any law that “regulates even-handedly to effectuate a legitimate local public interest, and [where] its effects on interstate commerce are only incidental, will be upheld unless the burden imposed on such commerce is clearly excessive in relation to the putative local benefit.”

NPPC and AFBF also argued Proposition 12 regulates out-of-state conduct. The Court blew away this argument as well, saying “A statute is not invalid merely because it affects in some way the commerce flow between the states.”

The Court claimed that when a statute “has significant extraterritorial effects it passes Commerce Clause muster when those effects result from the regulation of in-state conduct.”
The Court made clear that California’s Proposition 12 and implementing statute applies to both California hog producers and out-of-state producers therefore not targeting an extraterritorial activity. The Court stated “In-State and out-of-state hog farmers are burdened in exactly the same way – all are effectively prevented from raising hogs in violation of Proposition 12 if they wish to sell their products to California.”

Costs for out-of-state producers
NPPC and AFBF complain that California’s Proposition 12 places excessive burdens on interstate commerce. The Court was not impressed that the proposition would create substantial costs on out-of-state producers. The Court made it clear it believed “…there is no burden on interstate commerce merely because it is less profitable than a preferred method of operation.”

The Court concluded saying “…Plaintiffs have failed to demonstrate that there is a substantial burden on interstate commerce.”

Not a good decision for agriculture. Now on to the 9th Circuit Court of Appeals!
Email this author

«
The Jefferson Journal: Spaced Out, Hidden, Here Come the 2020 Tax Hikes»
Behaving Like a Commonwealth