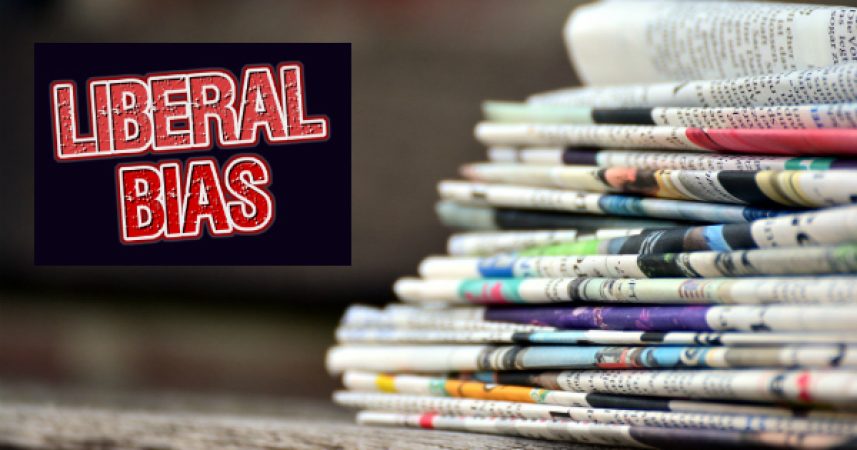 There are far more liberal/Democratic journalists than conservative/Republican journalists, but political bias has little influence over how they report the news, finds a new study on media bias, “There is No Liberal Media Bias in the News Political Journalists Choose to Cover.”

The study, one of whose three co-authors, John B. Holbein, is an assistant professor of public policy at the University of Virginia, uses Twitter postings as a tool to measure the ideological leanings of thousands of journalists. By this measure, the scholars confirm the widespread public perception that journalists are far more liberal than the public at large. 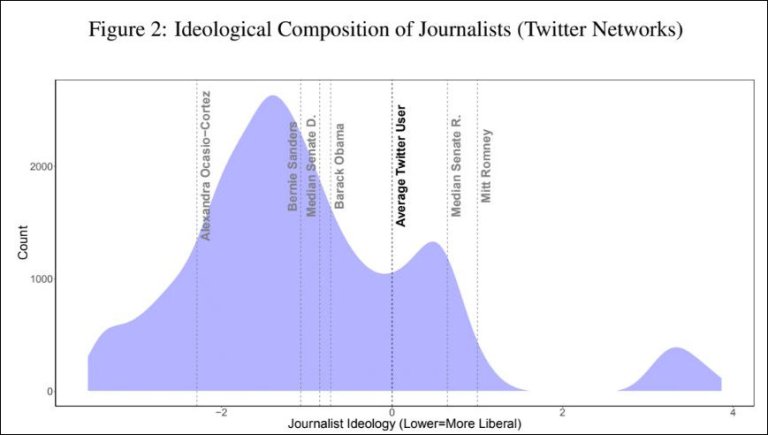 The figure above shows the ideological distribution of 13,500 journalists based on their Twitter interactions. “As can be seen, journalists are dominantly liberal and often fall far to the left of Americans,” the study says. “A full 78.1% of journalists are more liberal than the average Twitter user. Moreover, 66% are even more than former President Obama, 62.3% are to the left of the median Senate Democrat (in the 114th Congress), and a full 14.5% are more liberal than Alexandria Ocasio-Cortez (one of the most liberal members of the House). In short, journalists are overwhelmingly liberal/Democrats.”

However, the authors write, journalists strongly value objectivity in reporting the news. Based on responses of the 18.3% who responded to a survey, they conclude, “Despite being dominantly liberals/Democrats, journalists do not seem to be exhibiting liberal media bias (or conservative media bias) in what they choose to cover.”

Nice try, fellas. But you’re not going to persuade anybody.

I will accept the methodology for using Twitter to measure the political leanings of journalists. Perhaps someone should take a closer look at the findings, but I find nothing surprising here. Well, I guess I’m somewhat surprised that 14.5% of journalists are further to the left than Ocasio-Cortez — I didn’t know such a thing was even theoretically possibility. Still, the findings align with my view of reality.
The disputable finding is that liberals and Democrats don’t exhibit liberal media bias. Here’s how Holbein and his co-authors came to that conclusion:

We created an artificial campaign email address for a fictitious candidate for the state legislature. We emailed the journalists on our list asking them to cover the potential candidate. Covering campaigns and the people who run in them is a vital part of political journalists’ jobs. …. This story appears to be something that is generally considered newsworthy, but it subject to journalist discretion and is exactly the type of story where gatekeeping biases would be manifest.

Our email appeared to be from a campaign staffer indicating that the candidate was about to announce his candidacy within the next week and asking if the journalist would be interested in sitting down with the candidate sometime in the following week to discuss his candidate and vision for state government. The text in each of the emails was identical except for the bio of the candidate we included at the end of each message. … Each email described the candidate as being either a “Conservative Republican,” “a moderate Republican,” “a moderate Democrat,” or a “Progressive Democrat.”
In the responses received, journalists showed no meaningful bias in their responses to the candidates. They were just as likely to favor conservatives as liberals. In conclusion: “Despite the overwhelming liberal composition of the media, there is no evidence of liberal media bias in the news that political journalists choose to cover.”

While the narrow finding may be defensible — liberal reporters show no bias in choosing to write about conservative candidates — it is ludicrous to extrapolate to the larger conclusion that “there is no liberal media bias.”

That conclusion totally misses the point. You don’t hear conservatives/ Republicans griping about the media ignoring conservative/ Republican candidates. The Virginia media didn’t ignore Sen. George Allen when he ran for re-election in 2006, for example. To the contrary, the media devoted endless ink to the “macaca” fiasco, which kept him on the defensive, to the exclusion of other issues that might have favored him. Bias comes in the narrative framework embraced by the media. What issues do the media regard as important, and which can be safely ignored?

This point is so blindingly obvious that it astonishes me that some people take the trouble to deny it. Here at Bacon’s Rebellion, we do not pretend to be unbiased in our selection of news articles and the way we frame the issues. We do try to be fact-based, accurate and objective enough to acknowledge that stories often are multi-faceted, complex and have other ways of looking at them. But each of our contributors brings a distinct point of view to bear, and we don’t pretend otherwise.

At the blog I publish, Bacon’s Rebellion, I put a different spin on news and commentary than that of most reporters in the commercial/philanthropic media. So do Steve Haner and Don Rippert, who can, to varying degrees be described as moderate conservative or libertarian, and Dick Hall-Sizemore, who can be described as a moderate Democrat (which makes him less “liberal” than most journalists, according to the study). Peter Galuszka is the most liberal in his sentiments — we appreciate his efforts to keep us honest and prevent Bacon’s Rebellion from becoming a center-right echo chamber.

Coverage of the 2020 General Assembly session is a vivid illustration. With our different sets of biases, Bacon’s Rebellion has focused on very different news stories coming out of the legislature. We have highlighted story after story that has gotten virtually zero coverage in the newspapers. That’s not because liberal reporters and editors are consciously quashing stories they don’t like, it’s because they are actively pursuing stories that conform to what they think is important. What they think is important is not the same as what we think is important. It’s as simple as that.
Is that really so hard to understand?

A version of this commentary originally appeared in the February 21, 2020 online Bacon’s Rebellion.
E-Mail this author