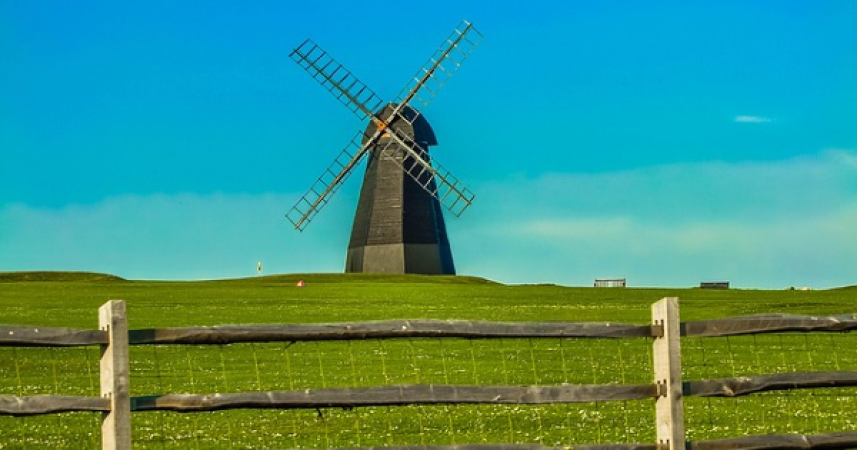 Wind and the Grid: A Precautionary Tale from the U.K.

So, you think the rolling blackouts experienced in California were a fluke and of no relevance to Virginia? Well, then, consider what’s happening right now in the United Kingdom, where “unusually low wind output” and a series of planned power plant outages puts the nation at risk of blackouts. You see, the U.K. relies upon wind power for literally half of its electricity, which is just dandy when the wind is blowing, but not so great when the airs are calm.

As it happens, here in Virginia, Dominion Virginia Power has finished installation of its first two offshore wind turbines. Those two units are paving the way for a much wider deployment of wind power in the Atlantic Ocean. The utility forecasts that wind will account for 5.1 megawatts of its electric-generating capacity (about 20%) within 15 years.

In the U.K. the becalming of the wind — windpower is expected to drop from 51% of output to as low as 10% over the weekend — coincides with planned outages at two of the country’s nuclear reactors, reports the Daily Mail. The National Grid Electricity System Operator reassured the Brits that it would “make sure there is enough generation” to prevent blackouts…. In other words, the U.K. will be cutting it really close.

One big difference between the UK and Virginia is that the UK continues to invest in nuclear energy to supply a reliable base-load of electricity. Here in Virginia, the 15-year forecast in Dominion’s Integrated Resource Plan (IRP) assumes that its two aging power stations will be re-licensed. But powerful environmental groups oppose the projects, which are still several years out, in the expectation that energy conservation and battery storage will be able to make up the difference.

Another difference is that Virginia’s portfolio of renewable power sources will rely heavily upon solar. Indeed, the IRP forecast projects three times as much solar as wind. That makes Virginia less vulnerable to a falloff in wind but more vulnerable to extended cloudiness.

The UK experience points out other problems associated with excessive dependence upon renewables:

During the national lockdown earlier this year, the network was inundated with extra power.

National Grid had to spend £50million on the second May Bank Holiday weekend alone to pay power producers – including surplus wind and solar farms – to switch off.

It spent almost £1billion on extra interventions to prevent blackouts during the first half of the year and also handed out money to EDF Energy to halve the amount of power generated at its Sizewell B nuclear plant.

Bacon’s bottom line: Virginia will get to a 100% renewable grid eventually. But it is reckless and dangerous to set arbitrary deadlines in the hope that somehow, maybe we will have developed batteries or other energy-storage mechanisms that will allow us to maintain reliability without driving electricity rates into the stratosphere. Until such technologies are proven, we need to maintain a base supply of nuclear and, dare I say it, natural gas. Further, we’ll need quick-surge natural gas capability to fill in when the sun don’t shine and the wind don’t blow.

The most discouraging thing about the discourse about maintaining the reliability of Virginia’s electric grid is that the environmental lobby has yet to say anything more reassuring than, “We’ll figure it out.”

A version of this commentary was originally posted on October 16, 2020 in the online Bacon’s Rebellion.