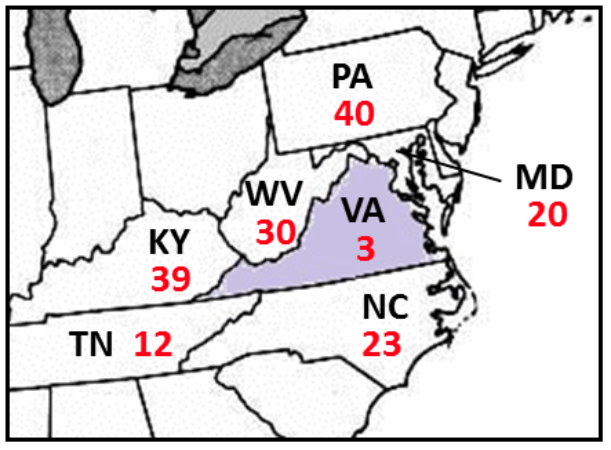 Virginia has been a leader in economic growth over the past five years
while many other states have yet to experience significant growth. So why is
it that Virginia does so well while other states continue to struggle? The latest
edition of the American Legislative Exchange Council’s “Rich States, Poor
States,” uses census data to explain why some states have seen economic
growth in the last decade while others have continued to see decline. Through
statistical and anecdotal evidence, the analysis makes a compelling case that
pro-growth economic policy is what really makes the difference in achieving long-
term growth in Virginia.

The new data in the fifth edition of “Rich States, Poor States” outlines
two sets of state rankings. The first ranks economic performance based on the
past 10 years of economic data such as income, population and job growth. The
second ranks economic outlook by using 15 policy variables that include tax and
regulatory burdens, recently legislated tax changes, and labor policy.
The 2012 ALEC-Laffer State Economic Competitiveness Index ranks
Virginia 3rd in the nation for economic performance and 8th for economic outlook.
As shown in the map below, Virginia’s economic outlook ranking far
exceeds every single one of its neighboring states making Virginia the most
competitive state in this region. By keeping tax rates lower than surrounding
states, Virginia proves to job creators and taxpayers alike that they are open and
ready for business.

Economic Outlook Rankings of Virginia and Neighboring States
Virginia has a strong economic advantage in this region, especially when
it comes to attracting business and investment. Last year, companies such as
Northrop Grumman and Betchel Corp not surprisingly chose to set up shop
in Virginia instead of Maryland. Though Maryland did offer both companies
temporary tax incentives, Virginia offered long-term growth potential with a low
tax and regulatory climate.

Anecdotal and statistical examples such as these are used
throughout “Rich States, Poor States” to compare and contrast economic policy
in all 50 states. This publication is widely used by state legislators who want to
effectively drive economic growth and improve the standard of living for their
citizens, Democrat and Republican alike. It shows that states that allow the
government to heavily interfere with economic transactions through increased tax
rates, burdensome regulations, and bloated spending have lost economic vitality.
Many states such as Maryland have even seen taxpayers migrate to states with
lower taxes and more competitive business climates, like Virginia.
The beauty of the American experiment is that there are 50 “laboratories
of democracy” that can replicate the policies that have worked and avoid those
that have failed. ” States with suffering economies need to look to Virginia as a
proven model of success. The Commonwealth affirms that states cannot tax,
borrow, or spend their way to prosperity.

Like any other state, Virginia holds its economic future in its own hands.
By continuing to create an environment where businesses can invest, develop,
and create jobs, Virginia will keep leading the way for economic competitiveness
for states across the nation.


Kailee Tkacz is an ALEC Research Analyst for the Center for State
Fiscal Reform.