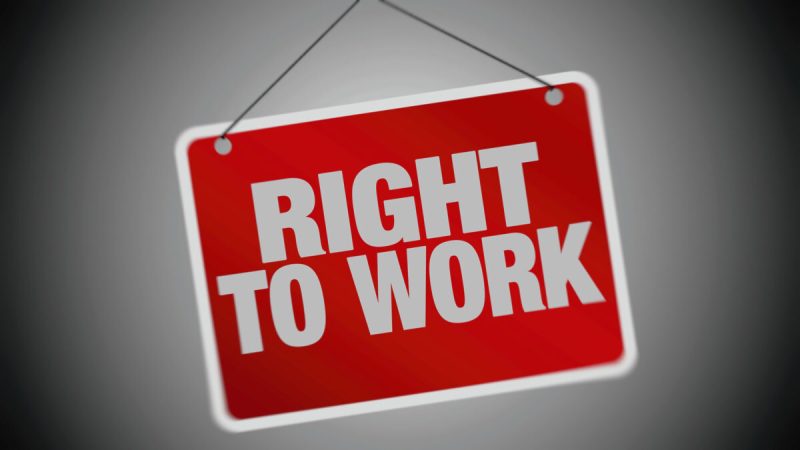 The PRO Act would take away Choice from Virginia’s Workers

A bill under active consideration in Congress would allow unions to get Virginia workers fired for not paying union fees. The Protecting the Right to Organize Act, among many other things would end right-to-work laws in Virginia and in 26 other states.

According to a recent report by the Institute for the American Worker, 89,000 Virginia workers are unionized and currently protected if they change their minds by our state’s right-to-work law.   Those that have chosen not to join a union would be forced to pay union fees if the PRO Act passes. Those that are already members would lose the ability to choose to opt-out and stop paying union fees if they feel they are not getting good representation.

Another 2,971,327 Virginians could be forced to pay union fees if unions organize their workplace and the PRO Act kills right-to-work.

Union dues in Virginia average $544 per year with some unions charging over $1,000, not insignificant sums for middle- and lower-income families.

Right-to-work laws ensure that private sector workers unionized under the federal National Labor Relations Act (NLRA) are given a choice to join and pay a union or not. Without right-to-work, a union can tell an employer they have unionized that one of their employees is not paying union fees and cannot work there anymore.

Virginia was one of the first states to pass right-to-work and since worker freedom was enacted in the 1940s has enjoyed bipartisan support from both Republicans and Democrats.

Right-to-work is popular in Virginia. A recent survey from the bipartisan government affairs and research firm Forbes Tate Partners shows that 72 percent of Virginian voters are concerned that the law will be repealed and 65 percent supporting worker freedom.

In addition to giving workers the freedom to choose whether to support a union or not, right-to-work states enjoy higher personal income growth, lower unemployment and more jobs. Some union leaders even say that right-to-work helps them.

It also means that workers get better representation because unions need to earn union dues and cannot take their members for granted.

Sen. Mark Warner has known these facts throughout his career and it may be why he has not come out in support of the PRO Act.

Even before being elected to the Senate then candidate Warner noted his support for Virginia’s right-to-work law. Clairvoyantly he also opposed federalizing the issue as would be done in PRO Act. In a 1996 debate against then Sen. John Warner Mark Warner pledged “I strongly, strongly support Virginia right-to-work laws but I don’t think we ought to federalize them.”

Another of the PRO Act’s many harmful provisions is that it would take away opportunities for independent workers to work for themselves and box them into a traditional employer/ employee model. This is another reason why Sen. Warner is urging caution on the PRO Act stating “My fear is that parts of the Pro Act try to fit all work into kind of a 20th century, classic W-2 employment status.”

This idea was already implemented in California with disastrous results. The California law was so bad that even the bill’s sponsor introduced and passed legislation limiting it. California voters then went to the ballot to further water down the law. Unfortunately, no such protections exist in the current version of the PRO Act.

Warner is standing strong to protect workers and entrepreneurs and should be applauded for not supporting the PRO Act even as unions use both pressure and weekly cakes to try to win him over.

Worker freedom is right for Virginia and the PRO Act would harm both workers by removing their choice to support a union or not and the state itself by taking away jobs and opportunity.