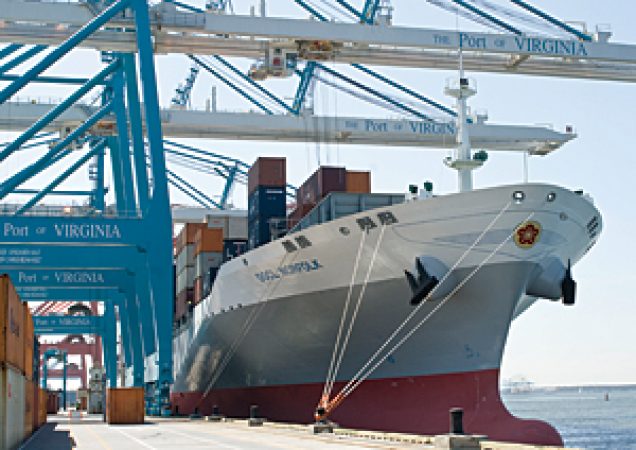 (Part I of this article ran in the last issue of the Jefferson Policy Journal, November 17, 2012 click here).

Privatization would be one way to describe APM Terminal’s proposal to unify Virginia’s ports, but that misses the larger point, says Crowley. It’s about moving to a different business model.

Let the private sector do what it does best, raising capital to invest in expansion and efficiency, and let the public sector do what it does best, economic development. As operator of more than 60 terminals around the world, APM can draw upon top talent and best practices to increase efficiencies. Additionally, APM can tap its balance sheet to raise capital, which Virginia is hard-pressed to do.

For starters, Virginia International Terminals is bleeding cash. With operating revenue of $94 million, VIT pays $50 million in debt service, $38 million in rent for APM Terminals and $35 million in operating costs. The operating loss will amount to $29 million and $25 million in FY 2013. The financial picture gets increasingly bleak through 2030 when the APM lease expires. Says Crowley: When the lease expires, $1.2 in projected future cash flows will disappear.

In the face of weak financial performance, the VPA has not pursued any expansion option other than Craney Island. Built on land created by dredge fill, Craney Island would cost $2 billion to develop.

“The state does not have that kind of money,” says Crowley. The commonwealth has maxxed out its long-term debt for now, and its ability to issue new debt in the future will be constrained. The state will not be able to borrow $2 billion for Craney Island without sacrificing debt capacity for other priorities such as roads, bridges, mass transit, higher education or mental health.
By contrast, APM Terminals will be able to expand port capacity by increasing throughput through existing terminals. Executing Phase 2 of APM’s Portsmouth facility will cost roughly $300 million. The proposal also contemplates expanding capacity in the Norfolk terminals by employing the same kind of container-yard rationalization demonstrated in Portsmouth. All told, APM can accommodate the next five decades of growth for about one-third of the capital cost of developing Craney Island.

But the decision must be made soon, Crowley argues. While the ports are operating at 60% capacity today, Virginia needs to have its expansion plans in place by the time the ports reach 80% capacity. That provides enough slack in the system to continue to serve shippers during the construction phase. “You need to assure customers there’s enough capacity for the future.”

Even though Virginia ports are trending below their potential, Crowley is confident that growth is coming. Hampton Roads is one of only a few East Coast ports in a position to gain traffic from the widening of the Panama Canal. “It’s not like a spigot will turn on,” he explains. But Virginia ports should see incremental growth over several years. “Now is the time we need to decide about construction of new capacity.”
According to Koch’s analysis, APM Terminals’ proposal is “financially superior” to current VPA operations. How much superior depends upon the “discount rate” used to calculate the net present value of the cash thrown off by port operations. (“Net present value” values a dollar earned today more than a dollar earned 40 years from now on the grounds that today’s dollar can be put to work and earn more money over the next four decades.) If the state discounts future incomes and costs at 5.0% annually, as APM has done, then the value of its offer to the commonwealth is $4.3 billion, significantly more than the $2.3 billion that the current enterprise is worth.

However, Koch said, the value of the ports to APM Terminals is $6.4 billion. Thus, while a deal with APM is more advantageous than sticking to the status quo, he added, “my analysis suggests that there is room for the commonwealth to negotiate a more attractive arrangement.”

Koch did not try to calculate the value of economic development stimulated by the new model, which, in Crowley’s vision, would allow the state to concentrate on “investing outside the gate”: building logistics parks, warehouse distribution centers and other infrastructure to capture corporate logistical and industrial development.

Crowley disputes Koch’s estimate of the deals’ value to APM, arguing that the economics professor failed to deduce capital investment, concession payments and tax payments that represent cash out of AMPT’s pocket.

Regardless, the McDonnell administration hopes to strike an economic development bonanza. Restructuring the port ownership is one part of the plan; building the U.S. 460 Connector, a $1.4 billion Interstate-quality highway between Suffolk and Petersburg, is the other. That highway would provide a south-of-the-James highway alternative to Interstate 64 for port traffic to reach the national interstate network. The state would fund the project through nearly $1.18 billion in state and Virginia Port Authority funds and $216 million in toll-backed bonds.

According to analysis conducted by Chmura Economics & Analytics, the 460 project would accelerate the development of two manufacturing mega-sites along the 460 corridor. If fully developed, the two mega-sites potentially could have an annual economic impact of $5.7 billion. Additionally, Chmura projected that increased port activities would amount to $1.4 billion.
The maritime community has favored instead a third crossing across the James River — the so-called Patriot’s Crossing. Crowley does not want to get into specifics about which project APM recommends. “Generically, we’re supportive of the commonwealth decisions to improve the infrastructure and flow of port traffic. [The U.S. 460 project] seems to be very compatible with what we’re thinking about.”

Crowley also refrains from criticizing the performance of the Virginia International Terminals and strategic vision of the Virginia Port Authority. “Our relationship with the VPA has been very good,” he says. He sees APM’s proposal as a “natural evolution” to a “higher model.”