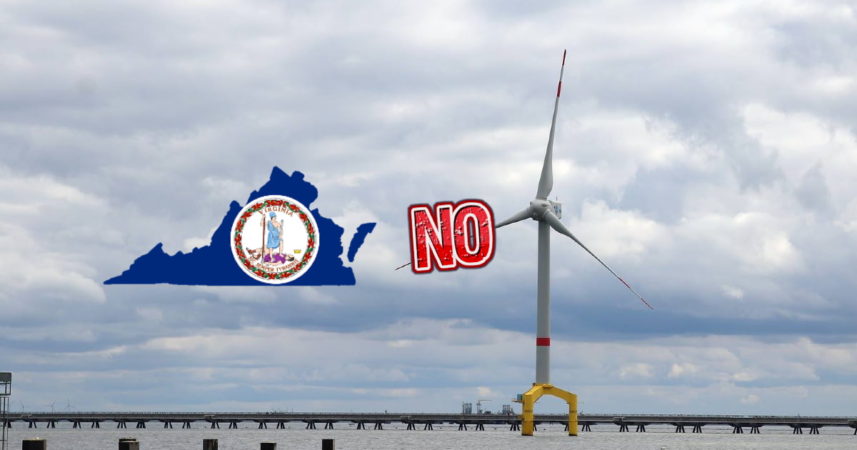 SCC Staff Review Opens the Door to “No”

Testimony filed by the State Corporation Commission staff on April 8 opened a slight possibility that the Commission could reject Dominion Energy Virginia’s proposed $10 billion wind project off Virginia Beach. It all depends on how the SCC decides to calculate the project’s levelized cost of energy (LCOE), the dollar cost of every megawatt hour of electricity it produces plus the transmission costs.

When the 2020 General Assembly adopted the Virginia Clean Economy Act and related legislation, it set a cap on that key LCOE measure, which is used to compare the costs of various methods of making electricity.

If the utility failed to stay under the cap, the SCC would have the authority to reject the proposal as imprudent and unreasonable. If the project remains below the cap, legislators mandated approval by the SCC, despite any other doubts about its prudence and without considering less expensive alternatives.

No party to the case so far has asked the SCC to reject the application, perhaps doubting that the two judges will thwart the utility’s plans absent an indisputable finding that the project exceeds the cost cap.

The cap set was $125 per megawatt hour, after deducting the value of the very large tax credits granted for wind projects under federal law. In the application it filed late last year to build the facility, it estimated the LCOE (after the tax credits) at about $83 per megawatt hour. But Katya Kuleshova of the SCC’s Division of Public Utility Regulation challenged several of the assumptions in her testimony and noted that if the assumptions prove wrong, that number rises substantially.

If a combination of the many assumptions – actual construction cost and schedule, energy output from the installed turbines, the assumed 30 years of operation – prove too optimistic, then the cost of energy can exceed that $125 per MWH target, she wrote. She also challenges Dominion’s failure to include $1.7 billion in future decommissioning costs, and questions whether at least some related energy storage batteries should have been included.

Unfortunately, most of the details of her analysis are based on data the utility has labeled as extremely sensitive or confidential, so her numbers are also either redacted or contained in sealed documents. The most important energy investment in Virginia’s history is being made with customers kept in the dark. Testimony from other witnesses is also riddled with redactions, and much of the May hearing will likely be behind closed doors.

Kuleshova also details the risks being imposed on Dominion’s 2.6 million Virginia ratepayers, again almost all of it hidden behind secrecy, pages and pages of inked-over text.

Dominion proposes to build 176 turbines, each capable of generating 14.7 megawatts of electricity, 27 miles off the coast of Virginia Beach. It hopes to start construction next year and be fully operational for 2027. The case has already built up a massive file of documents and exhibits. Public comments are being taken here until May 16.

If approved, the costs for the project will begin to appear on customer bills this September in a new stand-alone rate adjustment clause (RAC). It starts small but ramps up quickly during the construction process and should peak in 2027 to just over $14 for a residential customer using 1,000 kilowatt hours in a month. This RAC will work differently, with customers credited for certain avoided costs. Thus after plant operation begins the bill charge may start to decline.

President Joseph Biden has put the federal government on a crash course of offshore wind development on the Eastern Seaboard, with more lease areas expected to be claimed. Among all the projects so far, as testimony from the advocacy group Clean Virginia has detailed, Dominion’s is 1) the largest by far and 2) the only one that will be owned by a monopoly utility with its ratepayers directly providing the capital and profit and bearing great risk.

Every other project as of last year is owned by a third-party developer who will sell the power to a specific utility under a power purchase agreement or sell the related renewable energy credits to a state or utility. The Clean Virginia analysis does not provide evidence those are cheaper alternatives, but it becomes a fair question to ask. There is also (yet again) sealed testimony from that expert witness which may address that question.

The party to the case charged by law with representing Virginia’s consumers, Attorney General Jason Miyares (R), did not have his outside expert witness focus on the company’s calculation of levelized cost of energy. That testimony focused on how the project is not needed for its energy production, not really needed to meet emission reduction goals, and the company’s claims that the project is a net financial benefit to consumers is based on faulty assumptions.

Both the AG’s witness and the SCC staff go into detail arguing the claimed customer benefit (measured as net present value) is really negative, and substantially so. Like the calculation of levelized cost of energy, however, there is no firm guideline or agreed upon industry standard what to include and what to exclude in the formula. The two SCC judges (the 2022 Assembly failed to fill a vacancy) will decide.

Despite the finding that using different but still reasonable assumptions, the project might exceed its legislative cost target, the SCC staff did not recommend that the Commission reject the application. Neither did the Attorney General, the consumer’s representative at the table, despite his evidence that the project benefit numbers are wrong and lower cost approaches were ignored.

Attorney General Miyares, the SCC staff, and other parties have asked the SCC to impose a cost cap on the project, and to find some way to put the cost of any construction delays or overruns back on the utility. There are also solar projects previously approved where if the energy production, as measured by the capacity factor, falls too low consumers are protected from the downside cost.

Hearings are the next major step in the review, starting May 16.