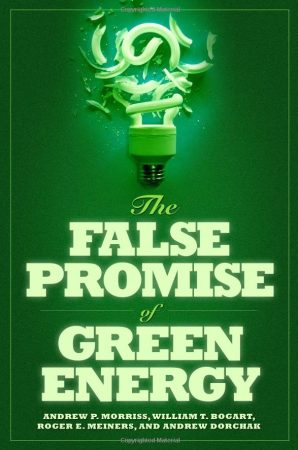 “PC” Power is Not “Sustainable”

President Obama’s mantra du jour for his 2012 campaign speeches is “all-inclusive” energy.  Any business touting this type of version of “all-inclusive” would be prosecuted for false advertising.

Increasing pain at the price at the gas pump and the home/office electric plug highlights the reality that Mr. Obama’s PC power and energy policies are anything but “all-inclusive” or the other PC buzzword — “sustainable.”  In fact, if the Keystone XL pipeline’s oil were used to generate electricity, it would provide more energy than all existing US wind and solar installations combined.

Be they massive or small-scale, actual or theoretical and decades away – wind, solar, corn ethanol, switch-grass and algae projects — are being paid for with countless billions of taxpayer and ratepayer dollars. The arrangements are sweet for promoters and “investors” on the receiving end, and for politicians looking for campaign contributions from these recipients.  It’s crony-capitalism at its best.
But these “PC” energy alternatives are neither nice nor “sustainable” for those of us paying the tab.

Consider wind power. Whether you’re talking about massive, multi-billion-dollar projects covering miles of ridge-lines and hundreds of thousands of acres with mammoth 400- to 500-foot-tall industrial wind turbines (which kill a half-million birds and bats without penalty every year, according to the US Fish and Wildlife Service and American Bird Conservancy), or you mean the comparatively smaller turbines being installed for personal home use around the country, both are being erected thanks to billions of dollars in generous state and federal incentives forcibly collected from taxpayers and ratepayers.

A recent news story in Western New York fairly sparkled with praise for one of these small wind projects. A semi-retired small farm owner and his wife just installed their third personal-size “windmill,” with high hopes that the turbines will provide much of their electricity.

That adds up to $130,000 that the rest of us taxpayers and ratepayers paid to cover the cost of one residence’s electricity. And yet, when the wind isn’t blowing hard enough, is blowing too hard, or isn’t blowing at all, the part-time farmers will still be utilizing the same “baseload” sources (hydroelectric, natural gas, coal and nuclear) that we all rely on. These farmers get much of their electricity “free,” while we pay for this PC power and redundancy.

The Heritage Foundation recently reported the startling news that the “average” American’s annual income is $32,400, while those living off government entitlements now average $32,700 per year. That means the $130,000 that actual ratepayers and taxpayers are paying to cover the cost for one residence to get this PC electricity equals more than four years of before-tax wages for today’s “average” worker.

Suppose now that 100 residences across New York (or any) state are able to get the same deal, and have one to three home-use-size turbines installed.  Those 100 residences would get their PC electricity at a cost to the rest of us of $7,500,000 to $22,500,000! How quickly PC power’s costs add up.

New York State is ranked as one of the worst states in the country for doing business.  The reasons include its high taxes, onerous regulations and high electricity rates.  A recent Manhattan Institute report noted that states like New York that have mandated the use of PC wind power and other “renewables” have seen their electricity rates soar ever higher – increasing by 30% to 50% above prior levels.

So while a few folks may be lucky recipients of personalized PC electricity installed at their homes, the rest of us must pay these costs through higher tax and utility bills.  And the economy is not recovering quickly as businesses avoid or leave the states such as New York and California, hospitals and schools cut staff and services to pay higher electricity bills, and “average” wage earners struggle even harder to make ends meet.

This is “sustainable”? Is this caring about working people and our poor? Is this our energy future?

Isn’t it wonderful how our government offers $55,000 to $75,000 per turbine to encourage rural families to install personal wind generators on their property, while the rest of us “get” to pay the tab?

Will it really surprise anyone when today’s “average” wage earners simply decide it isn’t worth the struggle anymore, and join the ranks of those living on the government/taxpayer dole?

Sadly, we are already on this slippery slope. The Obama Administration and many states are increasingly focused on a “green” energy agenda that is causing energy rates to “necessarily skyrocket.”

Thanks to a well-orchestrated environmental movement backed by the United Nations, some multi-national corporations and wealthy US foundations, the Administration’s strategy is already working.  Worse, it is being helped by misguided people who fail to consider the long-term ramifications as they exploit and advance these kinds of “incentive” programs in the name of “sustainability” and “environmental justice.”  At some point, we and our children and grandchildren are going to have to pay the fiddler.

No one I know is opposed to “green” energy per se, as long as it can be fully justified by sound scientific, economic and environmental analysis – and those who want it pay for it themselves. However, none of us have yet to witness one instance where this has been the case.

These taxpayer — and ratepayer — funded giveaways, imposed in the name of being “green,” are simply not “sustainable,” especially if we want our children and grandchildren to live in a nation where our economy is prospering.

Mary Kay Barton is a graduate of the State University of New York at Brockport, a former Health Educator, and a Cornell-certified Master Gardener.  She has served over the past decade in local Water Quality organizations, is a tireless environmental advocate, and enjoys gardening and birding in her National Wildlife Federation “Backyard Wildlife Habitat.”  Barton is now focused on promoting state and federal energy policies based on sound science that will provide Americans with reliable, efficient, affordable power – the basis for US progress, prosperity, health, environmental quality and greatness.


«
The Jefferson Journal: Tax Restructuring Can Benefit Every Virginian»
USDA Spy Proposal: So Much for Privacy