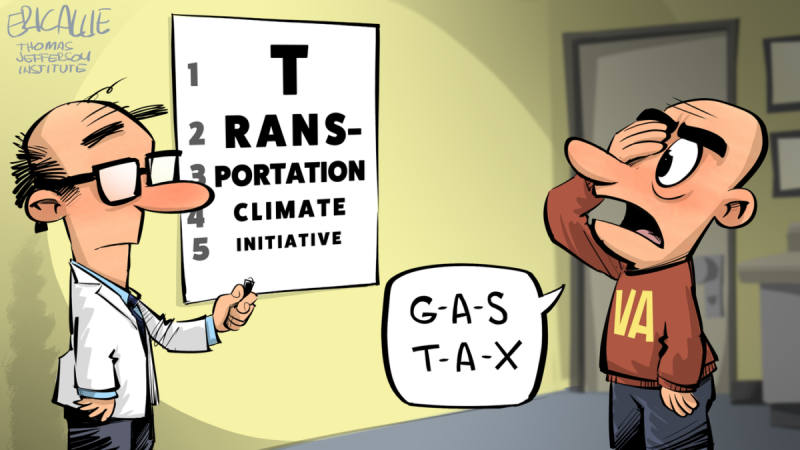 Why do Virginia’s leaders run away from the Transportation and Climate Initiative? Could it be because the first state legislature to consider it, in reliably Democratic Connecticut, just adjourned without even taking a vote on the proposed carbon tax compact, despite strong support from Democratic Governor Ned Lamont?

The Virginia Department of Environmental Quality has called a June 24 public meeting to discuss efforts to ramp down carbon dioxide emissions from transportation sources, but it made no mention of the pending TCI interstate compact. Instead it focused on the General Assembly’s approved 2045 goal of “net zero” emissions in all sectors of the economy, including transportation.

Reaching this target will help Virginia do its part to address the climate crisis, improve air quality and public health, and tackle inequities in our transportation network. The first step to these efforts will be public outreach and engagement by DEQ with support from our project facilitator AECOM. This project will inform an upcoming DEQ report that will investigate strategies to accelerate low-carbon transportation solutions and ultimately eliminate greenhouse gas pollution from the transportation sector,” DEQ wrote.

Is the stated goal of TCI, a 30 percent reduction in CO2 emissions by 2033 achieved by taxing and rationing gasoline and diesel, no longer considered sufficient by Virginia leaders seeking to avert to claimed catastrophe of climate change? Will some different “strategy” be proposed? Or are they just pretending to back away from the TCI approach for the time being? June 24 may finally bring the issue to light.

More information on TCI and its impact on Virginia can be found in this short video.

The DEQ meeting call came out the same day as the Georgetown University Climate Center was hosting another webinar on the TCI program, rolling out a new Model Rule version and a long summary of the recent round of public input, which elicited a detailed comment from the Virginia Manufacturing Association among hundreds of others.

Industry groups with an interest, pro or con, would be well served to review the new documents, which also include more details on how the state-based panels that will advise on spending the money must be controlled by environmental justice advocates, communities considered overburdened by transportation-relate pollution, and advocates for low-income residents.

Organizers resisted the push in the comment process to expand the target that 35 percent of the fuel carbon tax funds – which could be billions of dollars – be spent on those priorities. But the new documents make that 35 percent figure a floor and explicitly allow a larger percentage.

Also resisted were efforts to increase the targeted reductions beyond the stated 30 percent over ten years, although it is now mandated that will be reviewed three years in. Efforts to expand the use of carbon offsets were also not adopted, but what carbon offsets might be allowed will be left to the member states.

The new documents are now open for another round of public comment through August 13 on the TCI-P Public Input Portal.

During the 90-minute virtual meeting June 10, the June 24 DEQ meeting was referenced as a sign of Virginia’s “great conversation” over TCI, which made the DEQ announcement language harder to fathom. As the only hard proposal on the table, the discussion should continue to focus on TCI and voters should be informed about it during the coming election season.

Any proposal that seeks to wean Virginians more quickly off internal combustion engines, in cars, buses or work vehicles, is likely to produce even higher consumer cost than the considerable hit TCI would create. An analysis sponsored by Thomas Jefferson Institute put the figure at more than $700 per year for a family.

Only three states and the District of Columbia have indicated they will join the interstate compact so far. In the District and Massachusetts, legislative approval is not being sought. In Rhode Island, the issue is still in play.

Where Connecticut stands now is unclear, but its representative on the call said the Lamont administration remains committed and is exploring how it can move forward. The bill on the subject never came to an actual vote outside of the adoption of a substitute, and the analysis on the legislative website doesn’t even hint at a likely consumer cost.

The online CT Mirror account linked above is strongly pro-TCI, but gives credit for the defeat to a strong response based on the likely consumer cost:

But TCI’s legislative meltdown is clear, and it began when Connecticut Republicans, local oil industry leaders and other business groups labeled the potential gas price increase a “gas tax” that would trickle down as price hikes in everything from gas to groceries. Even though the “tax” label is inaccurate, it stuck, and TCI supporters were unable to deploy an equally effective counter-punch.

In the coming months, Virginians will decide for themselves if the “tax label is inaccurate,” unless in this state TCI continues to simmer without any news coverage or political debate.