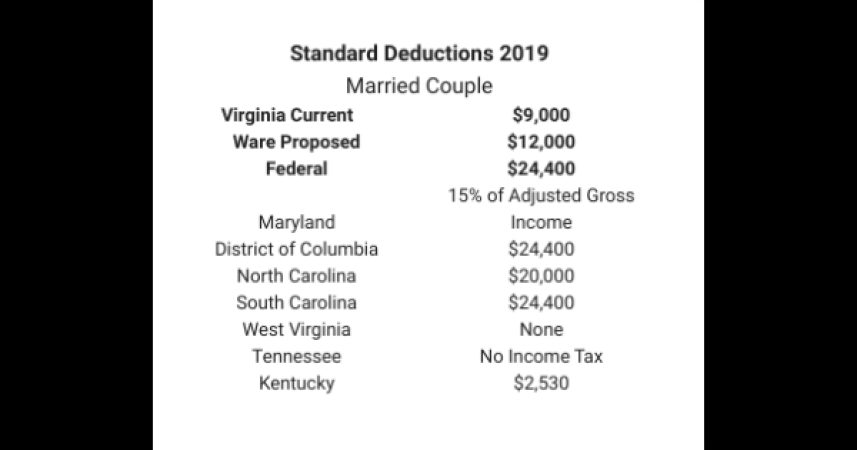 The new chair of the House Finance Committee has introduced a major long-term tax reform proposal that will help most Virginia families, and the former chair of the same committee has offered a significant improvement to it. Both are good bills that should be embraced by the Virginia General Assembly.

Delegate Vivian Watts, D-Fairfax, has proposed House Bill 735 to apply an annual inflation adjustment to Virginia’s income tax brackets, credits and the standard deduction. The federal tax code does that, recognizing that without that simple adjustment a progressive tax system becomes more and more regressive over time. Without indexing inflation provides the government with an annual unearned raise and families with a sneaky annual tax hike.

Delegate Lee Ware, R-Powhatan, dropped in House Bill 1717 right on the deadline Friday, to increase the standard deduction used by most Virginia taxpayers from the current $9,000 per married couple to $12,000. That was the standard deduction level recommended in several bills during 2019, and the Assembly did raise the amount – just not that high. It remains a goal of the Thomas Jefferson Institute for Public Policy.

Neither bill has been “scored” by the Department of Taxation, and once their fiscal impact is estimated the outcries from the spending crowd will begin. Were they to pass, there would be a large tax cut in the early years, followed by a general downward bend in Virginia’s future revenue growth. Tax policy should be considered without respect to the appetite for spending, if only because it will never keep up.

These ideas would be far more viable if Governor Ralph Northam had not plundered and spent the Taxpayer Relief Fund that the 2019 General Assembly created, knowing full well that conformity with new federal tax rules created an ongoing windfall. Now advocates will be cynically challenged to identify exactly what in the massive state budget they would cut to give taxpayers a break.

Watts is joined on her bill by Republican Joseph McNamara of Salem, a CPA who serves on the committee with her and Ware. Their idea is to apply the federal inflation measure known as Chained CPI-U (for urban consumers) to:

All would rise, slowly and steadily, keeping tax increases more moderate. Virginia has applied its maximum rate of 5.75% to incomes above $17,000 for decades. When it started that was a middle-class income, but that is long gone. Indexing Virginia’s tax code for inflation is long overdue.

Also overdue are additional amounts fully exempt from tax under the standard deduction. Most surrounding states are far more generous with their standard deductions, some matching the federal amount, which will be $24,400 for a married couple for 2019. But the states are, pardon the pun, all over the map on this as you can see in this useful table. For the most part, the states Virginia competes with for jobs and population have high standard deductions (North and South Carolina) or no personal income tax at all (Texas, Tennessee and Florida).

So, a Virginia family pays no federal income tax on their first $24,400 but starts paying Virginia tax at $9,000. If Virginia matched the federal standard deduction the savings would be a noticeable $800, give or take. Taking it to $12,000, as Ware proposes, is a first good step saving up to $173.

Ware’s bill takes Virginia at least to about one half the standard deduction at the federal level, and in North and South Carolina and the District of Columbia. Maryland allows a variable deduction of 15% of adjusted gross income, surprisingly harsh on working class incomes for that supposedly progressive state.

The Watts bill to add annual indexing was also recognized as a great move for families by the liberal Commonwealth Institute for Fiscal Analysis, although that may be the only common ground between it and the Jefferson Institute. As before, CIFA is pushing the idea of taking the existing Earned Income Tax Credit for low-income workers and making it “refundable,” meaning that if the credit amount exceeds the tax bill, the taxpayer would get the difference as a check.

Del. Jay Jones, D-Norfolk, has that bill. Last year Governor Northam was all over that idea, but now the path to “justice” is spend, spend, spend. He has proposed higher taxes on fuel, tobacco, gaming devices, new carbon taxes, and is introducing rules changes to make it easier to enforce tax collections from low-wage gig economy workers. Those are all regressive steps that the rich will hardly notice. Soak the poor.

Government spending never creates prosperity. If Virginia is going to have an income tax, it should certainly not apply it to dollars even the rapacious federal government will not tax. Step one is to do what the feds do and index the key provisions for inflation. Step two is to move closer – if not all the way – toward exempting the same basic amount of income from tax through a higher standard deduction. The Watts and Ware bills should pass.