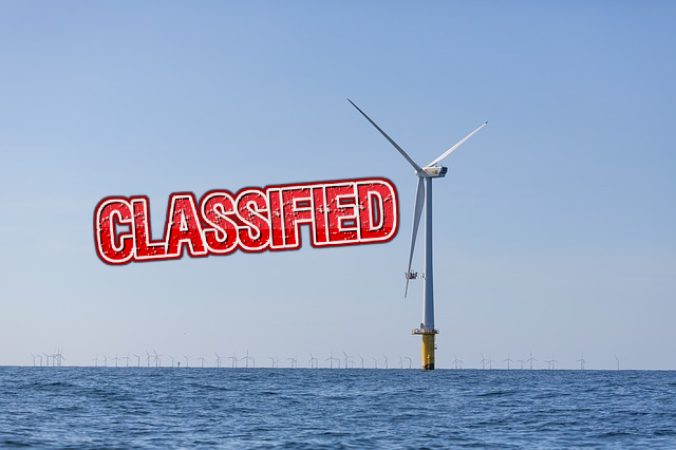 Virginia Attorney General Jason Miyares (R) has moved to open to public inspection much of the secret data and analysis about Dominion Energy Virginia’s proposed Coastal Virginia Offshore Wind project. His petition filed with the State Corporation Commission April 29 comes about two weeks before formal hearings on the application begin in mid-May.

Dominion is seeking SCC approval to build the 176-turbine project off Virginia Beach, and to begin billing customers for it with a new monthly charge. Authorized and all-but-mandated by the Virginia Clean Economy Act of 2020, the current estimated capital cost is $9.8 billion, including the required transmission upgrades but not including financing costs and utility profits.

The liberal use in the initial application of claims that data were confidential or extraordinarily sensitive obscured much of the cost and risk the project imposes on the company’s customers. Once designated as secret, only parties who have signed non-disclosure agreements can see the data or be in the room when the data is discussed in a hearing.

Miyares’ push to open more of the CVOW record follows a similar effort by that office to reverse confidentiality assertions by Appalachian Power Company (APCo) in a pending application dealing with that utility’s proposals for new renewable energy projects. Miyares’ Division of Consumer Counsel had filed a 142-page argument in support of that motion, citing among other things specific instances where information APCo claimed as too sensitive to release had been public in other cases.

That first motion was the subject of a hearing at the SCC on April 25, most of it in a closed session, but two days later the hearing officer declined to rule. The court reporter on the virtual session had technical problems and failed to record the debate between the Attorney General’s staff and Appalachian’s lawyer.

In this new motion, signed by Senior Assistant Attorney General Meade Browder, the focus is on how Dominion’s initial claims of confidentiality on key data caused the SCC’s own professional staff to also file much of its analyses and commentary under seal. One key witness filed 129 pages of public testimony with 52 of the pages containing redactions, some lengthy.

The project is “all-but” mandated because the General Assembly included a cost cap in the 2020 legislation, based on the project’s calculated levelized cost of energy (LCOE). If the utility fails to stay below that cap, the SCC has the authority to reject the project, and the key staff witness mentioned above claimed the project could exceed the cap under certain circumstances. But details were redacted. Browder complained:

With the breadth and scope of Confidential and ES (Extraordinarily Sensitive) designation…it would appear to be difficult for any meaningful examination of this important testimony to take place in public session.

In some cases, Miyares noted, the staff testimony redacted information that it didn’t need to because Dominion had included the underlying data in public portions of its application or has since revealed the details on its own. Staff also referenced and then redacted information from financial ratings services, which is usually only available to subscribers but has often been referenced openly in earlier cases.

Another SCC staff witness redacted details about the 30-year lifetime revenue requirement for the project, drawing this objection from the Division of Consumer Counsel:

This a public utility project that will be funded entirely by captive ratepayers with a dollar-for-dollar rate recovery mechanism. Captive ratepayers have the right to know how much of their money is being committed to pay for a project at the time it is being proposed. This would necessarily include the total cost of the project, plus the amount of any benefits that the Company believes it may be able to monetize for the benefit of customers. This further includes the impact that would accrue through anticipated changes to the capacity factor or capacity value.

In both this case and the pending Appalachian application, the Attorney General is making no objection to secrecy for specific bids or technical information provided by third party vendors.

The presumption in the SCC’s rules is that information in applications and testimony should be public, and the burden is on the party requesting secrecy to justify that. The motion calls on Dominion to review the instances cited, and if the utility chooses not to contest the request, then the item will become public record. SCC staff testimony versions without the redactions would be filed.

Whether that will happen before the hearing begins on May 16 remains to be seen. A decision on the similar APCo motion either way would have been a good indicator, but now that is delayed until a new hearing can be scheduled.

Browder is correct that as it now stands, much of the key information on the CVOW project’s LCOE, total cost, reliability and risks will be questioned and debated at the May hearings with the people who will be paying the bills excluded.

A version of this commentary originally appeared on May 1, 2022 in the online Bacon’s Rebellion blog. Stephen D. Haner is Senior Fellow with the Thomas Jefferson Institute for Public Policy. He may be reached at steve@thomasjeffersoninst.org.

«
Most States Outperform Virginia Over Past Decade»
Standards Decline: Can They Be Brought Back?