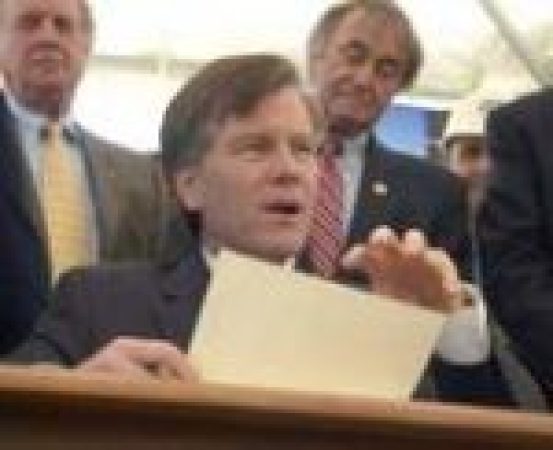 Two years ago when the General Assembly adopted the Governor’s transportation bonding package, everyone acknowledged that a sustainable funding initiative was necessary to meet the Commonwealth’s ongoing transportation needs.

The needs of our transportation system are undeniable: We have taken more than $3 billion out of our road construction program in the past 10 years to fund basic maintenance. Our secondary road program is defunct due to a lack of funding. Our debt service is $300 million a year and growing. The estimated economic loss due to congestion is over $3 billion a year. We are 40th in the nation in per capita spending on transportation.  Our road construction money will be gone in a few years.

Over the past two years we have seen about 20 pieces of long term funding legislation fail. The main reason for that failure is that legislators have become entrenched in positions that ensure failure. On one side there is the argument that no general funds should be used to fund transportation. On the other a refusal to accept any new revenues.

In his bill, the Governor proposes a bold new approach and asks all legislators to take two steps toward the middle to reach a compromise. The Governor’s proposal is a sincere effort to think outside the box, address one of Virginia’s most pressing problems and break the gridlock gripping the General Assembly.  It has merit and should be given serious consideration.
Substituting a sales and use tax (SUT) increase for the gas tax is reasonable. While many will argue that the gas tax is still the best user fee, the viability of the gas tax as the state’s primary revenue source for transportation has been eroded by greater vehicle fuel mileage, the introduction of alternative fuel vehicles and the impact of inflation. Replacing the current gas tax with a 0.8 cent increase to the SUT provides a reliable, predicable and sustainable revenue source. As the economy grows, the revenue from the SUT grows with it. As a percentage of the price of a product or service procured, the SUT inherently accounts for inflation. These are factors missing from the current gas tax. In addition, we must remember the nexus between the sales tax and transportation.  All goods sold in Virginia use our transportation infrastructure to get to their point of sale.

The motor fuels tax on diesel will remain unchanged.  About 20 percent of fuel tax revenues are from diesel sales, with 68 percent coming from long haul truckers.  In addition, heavy trucks have a disproportionately large impact on the deterioration of Virginia’s highways.

The 113th Congress will consider the Marketplace Equity Act, which would grant states the legal authority to collect out-of-state sales taxes. The Governor’s proposal would conform the Code of Virginia to any changes in federal law, contingent upon the Marketplace Equity Act being adopted by Congress. Potential revenues will be dedicated to transportation, public education and localities consistent with formulas already in existence.

If all the provisions of this bill are adopted by the General Assembly, we will see $3.1 billion in new funding over the next five years for our critical transportation needs. After that, we could see those numbers grow to nearly a billion dollars a year investment in transportation.

The Governor’s proposal is about investing in the Commonwealth’s future…investing in jobs, in economic development, in safety, in our quality of life.  When fully implemented, this bill will generate nearly 20,000 jobs, create more than $2.5 billion in economic activity in the Commonwealth and generate over $150 million in new tax revenues.  More importantly, this bill will improve mobility, reduce congestion, promote further economic activity, and improve safety on our highways—all factors that will improve the quality of life in Virginia for today and years to come.