Future of the Interstates Study Under Way 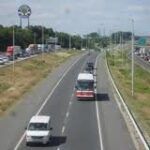 The Transportation Research Board last week formally kicked off a several-year study of the future of America’s Interstate highway system. In the FAST Act, Congress authorized $5 million for the study to figure out how this vital infrastructure should be upgraded and restored for the 21st century. TRB is in charge of the project, and has selected a blue-ribbon committee to oversee the work. Chaired by Norman Augustine (former CEO of Lockheed Martin), its 14 members include former DOT Secretary Norm Mineta, Metropolitan Transportation Commission Executive Director Steve Heminger, University of Southern California researcher Genevieve Giuliano, University of Texas researcher Michael Walton, and Michigan DOT Director Kirk Steudle. The Committee held its first meeting last week, at the National Academy of Sciences in Washington, DC.
There are five priorities for the study, as follows:

This study is long overdue, and should have been launched prior to the system’s 50thanniversary a decade ago. But at least it is now under way. While all five priorities are important, I’d like to offer a few comments on several of them. Since my own research that produced the 2013 Reason Foundation study “Interstate 2.0,” I have kept an eye out for proposed new Interstate corridors. As part of that exercise, I compiled data on large cities that have grown the most or shrunk the most between 1950 and 2008. Top of the list were Las Vegas (over 21 times more people than in 1950) and Phoenix (14 times more). Yet because the map of what became the Interstate system was drawn up during World War II, those two cities were almost afterthoughts—and there is still no Interstate route between them. Other high-growth cities include Tucson (11 times), San Jose (9 times), Austin (5 times), and Albuquerque and Charlotte (both 4 times larger). Yet a number of the new Interstate routes proposed by members of Congress and local boosters in recent years connect much smaller places. I hope the Committee and its consultants develop a rigorous methodology for assessing benefits versus costs for such new corridors.
Automated and connected vehicles will certainly have an impact on the demand for Interstate capacity in coming decades. One of the most promising developments is likely to be truck platooning, especially in corridors with high and increasing heavy truck movements. FHWA’s Freight Analysis Framework several years ago projected which specific Interstate corridors would reach 40% of their traffic as trucks in the decades between 2020 and 2040. Reason’s 2015 policy study “Truck-Friendly Tolling for 21stCentury Interstates” drew on that research to propose dedicated truck lanes in 11 major corridors, seven of which are multi-state corridors. Such dedicated lanes would be the best setting for truck platooning—and given how long it takes to get major highway projects implemented, planning needs to start now to be ready for the time truck platooning is ready for large-scale implementation.
Finally, the question of the resources needed for reconstruction and modernization is perhaps the most important outcome to be expected from this study. It is very clear that with current fuel taxes not generating enough revenue to even properly maintain current highway capacity, there is no identified funding source for the $1-2 trillion set of mega-projects that will constitute a 21st century Interstate system. Such a program cannot and will not be fundable out of annual cash flow. It is a need tailor-made for long-term user-feefinancing. And it would also be a good fit for procurement as a large set of P3 concession megaprojects, shifting the typical megaproject risks to investors, rather than saddling taxpayers with those risks.
For reference:
“Interstate 2.0: Modernizing the Interstate Highway System via Toll Finance,” September 2013. http://reason.org/files/modernizing_interstates_toll_finance.pdf
“Truck-Friendly Tolls for 21st Century Interstates,” July 2015.http://reason.org/files/interstate_tolling_trucking_industry.pdf
(This article first ran in the September 2016 edition of Surface Transportation Innovations)