A Common Definition for BRT, Please 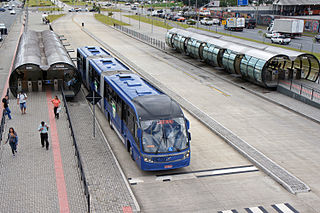 Bus Rapid Transit (BRT) is the fastest-growing U.S. transit mode. The Trump Administration has prioritized funding BRT projects over light-rail projects. A region can build three to nine BRT projects for every one light rail line. However, while BRT may be enjoying greater popularity, there is still considerable debate about the definition of BRT. And that debate may be affecting real-world projects.
BRT lines that run in a dedicated right-of-way 100 percent of the time are known as BRT heavy. BRT lines that share a lane with mixed traffic at least some of the time are known as BRT lite. BRT lines that run on Interstates or other limited-access highways for at least 50 percent of their routes are an emerging category called freeway BRT. All BRT lines have some or all of the following:

Many elected officials have been hesitant to jump on the BRT bandwagon. Like most Americans, they view light rail as a sexier option, even if it is an old 19th century technology. One reason that political leaders prefer rail is its perceived permanence. Once a light rail line is constructed, it does not get removed. BRT lines are designed to be permanent as well, but they could move to a different alignment as development patterns change. American development patterns have changed significantly over the last 50 years. Think of the advantage of moving a line to a densifying part of the city or connecting two suburban locations poorly served by transit. Practically, few lines are likely to be moved, but the ability to move a line is an advantage.
BRT practitioners are also worried about traditional bus service labeling itself as BRT and watering down the concept. BRT planners have worked to differentiate BRT from slow bus service that Americans often avoid. They worry that poor BRT service will cause riders to clamor for expensive, unneeded light-rail lines. The following table shows the difference between BRT and other bus services.

To convince politicians and the public that BRT is a quality service, different definitions for BRT have been developed. In theory, BRT lite follows the Federal Transit Administration (FTA) definition of BRT in which over 50 percent of the route operates in a right-of-way dedicated to transit during peak periods. The service must also have some combination of defined stations, traffic signal priority, and 15-30 minute headways for 14 weekday hours and 10 weekend hours. This service is labeled Fixed-Guideway BRT. However, in reality, the FTA also awards funding for Corridor-Based BRT systems that do not operate in their own lane or have their own guideway. All that is required to receive federal funding for BRT lite is short headways (time between buses), defined stations and traffic signal priority. Therefore, most practitioners don’t see dedicated lanes as a requirement.
The Institute for Transportation and Development Policy (ITDP) has developed standards closer to BRT heavy. ITDP’s BRT Standard scores lines based on BRT service quality and awards gold, silver, bronze or basic rankings. Systems that do not meet ITDP’s standards are rated as “not BRT”. The organization awards points in six categories (The BRT Basics, Service Planning, Infrastructure, Stations, Communications, and Access and Integration). It also deducts points for violations such as overcrowding and long headways. Systems can receive up to 100 points. Those scoring 85 or higher are gold; those at 70 or higher are silver; those at 55 or higher are bronze, while those at 30 or higher are basic.
However, to be considered BRT by ITDP, systems must be in dedicated lanes and have a specific alignment. And since this country builds mostly BRT lite, many U.S. systems don’t qualify, and many U.S. practitioners consider the guidelines too onerous, particularly in small and medium-sized communities. Many of the BRT gold, silver and bronze BRT systems are in developing countries ruled by authoritarian governments. If China or Indonesia decide that they want to convert a traffic lane to BRT, they don’t have to worry about an environmental review or public comment. We don’t have that style of government.
A recent development in the Tampa area shows that this difference is more than an academic exercise. Several outside transit experts met with Tampa’s political leadership and suggested that the region’s new transit plan was not real BRT. The region has plans for an extensive bus-based network that uses both BRT lite and freeway BRT. Unlike past Tampa rail plans, the bus plan had political and popular support. But when news broke of transit experts claiming that the plan was not real BRT, because it was not BRT heavy, the plan took a major hit. Some leaders who wanted light rail argued BRT was no substitute for rail despite the lack of popular support or funding for rail lines. Others who never wanted transit in the first place argued the region was wasting its money on ordinary bus service that moves poor people around. It would be ironic if the transit referendum fails, because some BRT folks are denigrating a BRT-based solution because it does not meet their standards.
We need to have a common-sense definition of BRT. We should not allow local bus services without ITS features and some type of running way priority to be called BRT. But it is just as crucial that we don’t mandate an unrealistic definition of BRT that imposes high costs on other roadway users.
(This column first ran in the July 2018 issue of Surface Transportation Innovations.)