(This is part X of this series on energy. We hope it helps the reader better understand the issues facing our country and our state as we endeavor to tackle the problem of providing our citizens and our businesses with their energy needs.)

* Choosing between different forms of energy often involves tradeoffs between competing objectives, such as affordability, environmental impacts, and energy security. These tradeoffs can sometimes be impossible to objectively quantify.[873] [874] [875] [876] [877]
* A 2008 Harris poll of 1,020 U.S. adults found that 92% favored “a large increase in the number of wind farms.”[878] The same poll found that among 787 U.S. adults who pay household energy bills:

* In 2015, the U.S. Energy Information Administration (EIA) projected that the levelized cost of electricity generated by new onshore wind power in 2020 will be 1% higher than that from advanced combined cycle natural gas [Adv CC], and the cost of photovoltaic [PV] solar will be 73% higher than Adv CC.[880] Per EIA, these levelized costs “significantly understate the advantage of Adv CC relative to onshore wind … while overstating the advantage of Adv CC relative to solar PV….”[881] See the section above on the costs of electricity for extensive details about comparing the costs of electricity generating technologies.
* A 2010 Rasmussen poll of 1,000 likely voters found that:

Much current debate on energy policy focuses on externalities associated with energy use. Many believe there is a large implicit subsidy to energy production and consumption insofar as pollution results in environmental costs not fully charged to those responsible. …
In fact, the effort to deal with environmental concerns has become a central feature of Federal energy policy. Substantial costs which were formerly outside the market mechanism have, through the implementation of a series of taxes and regulations, been internalized to energy markets.[884]

* “Subsidies,” as defined by the U.S. Government Accountability Office, are “payments or benefits provided to encourage certain desired activities or behaviors.”[885] Per the U.S. Energy Information Administration (EIA), subsidies “stimulate the production or consumption of a commodity over what it would otherwise have been.”[886]

* Ancillary consequences of government energy subsidies include but are not limited to:

* Forms of energy subsidies include but are not limited to:

* Examples of subsidies for:

* As of May 2016, neither EIA nor the Congressional Budget Office (CBO) has published annual historical data providing a comprehensive and consistent measure of direct federal energy subsidies.[962] [963] [964] [965] EIA has published such data for certain years, although the level of detail varies, and definitions of what constitutes direct subsidies are not always consistent.[966] CBO has published data on federal energy-related tax preferences going back to 1977. These EIA and CBO data are reviewed below. They do not account for:

* Per EIA, energy subsidies in the range of one percent of total energy sales are “in general, too small to have a significant effect on the overall level of energy prices and consumption in the United States.”[971] Likewise, per EIA, “market impacts are negligible” for “programs that offer small subsidies for products for which there are huge existing markets….”[972]

* Energy tax preferences, unlike R&D subsidies, are “directly linked” to energy production, consumption or conservation, and individuals and corporations must take “specified actions” to receive these subsides.[978] [979]
* From 1985 through 2015, inflation-adjusted federal tax preferences for:

* Per EIA, “some forms of energy receive subsidies that are substantial relative to” the energy they produce, and thus, a “per-unit measure” of energy subsidies “may provide a better indicator of its market impact than an absolute measure.”[982] [983] For example, in 2010, coal received federal electricity production subsidies totaling $1,189 million, while solar received $968 billion.[984] However, coal produced 44.9% of the nation’s electricity, and solar produced 0.1%.[985] [986]
* From 1985 through 2015, federal tax preferences per unit of primary energy production for: 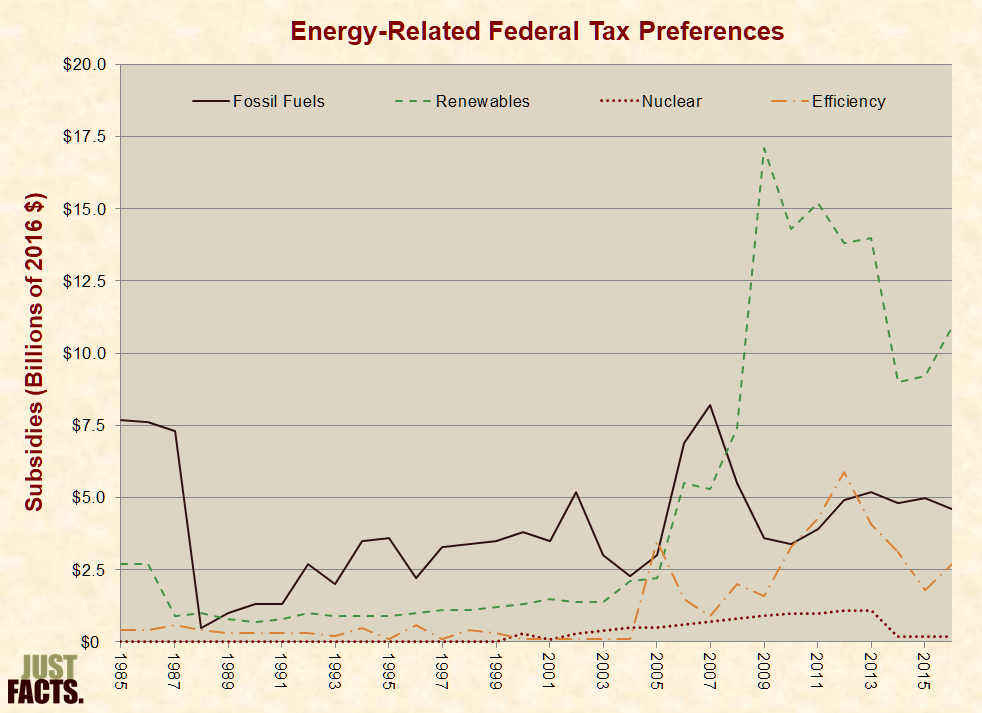 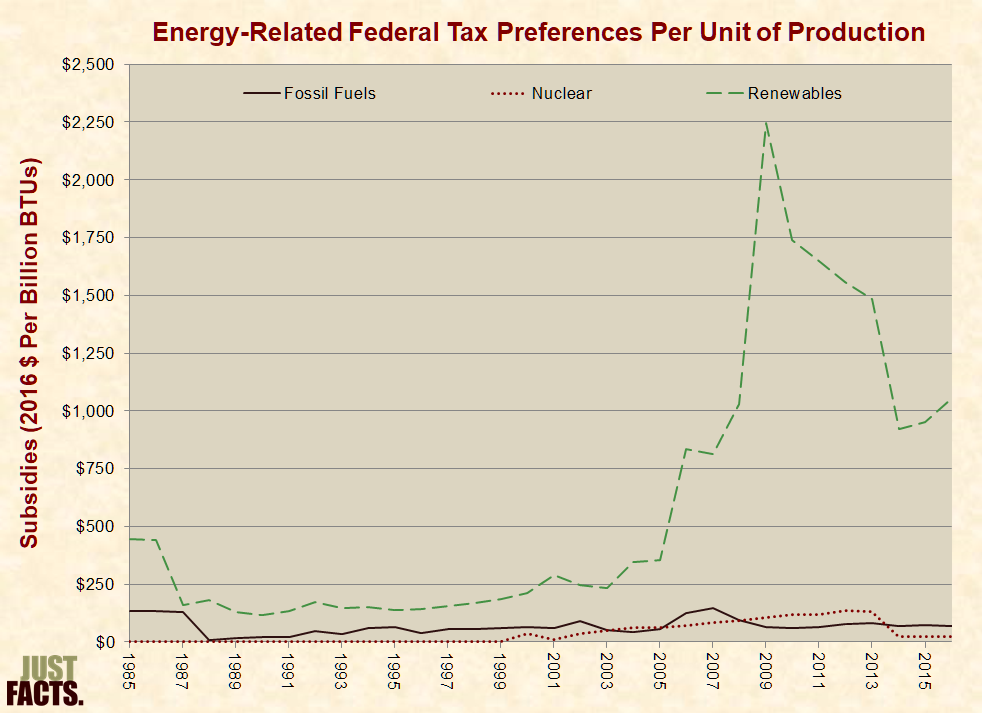 * Aggregating energy subsidies into broad categories (like fossil fuels and renewables) can obscure their nature, because specific components of these broad categories sometimes receive relatively large portions of the subsidies. Per EIA, federal energy subsidies are often “targeted at narrow segments of the energy industry” and provide “relatively large payments to producers using specific energy technologies that otherwise would be uneconomical.”[989] [990] For example: 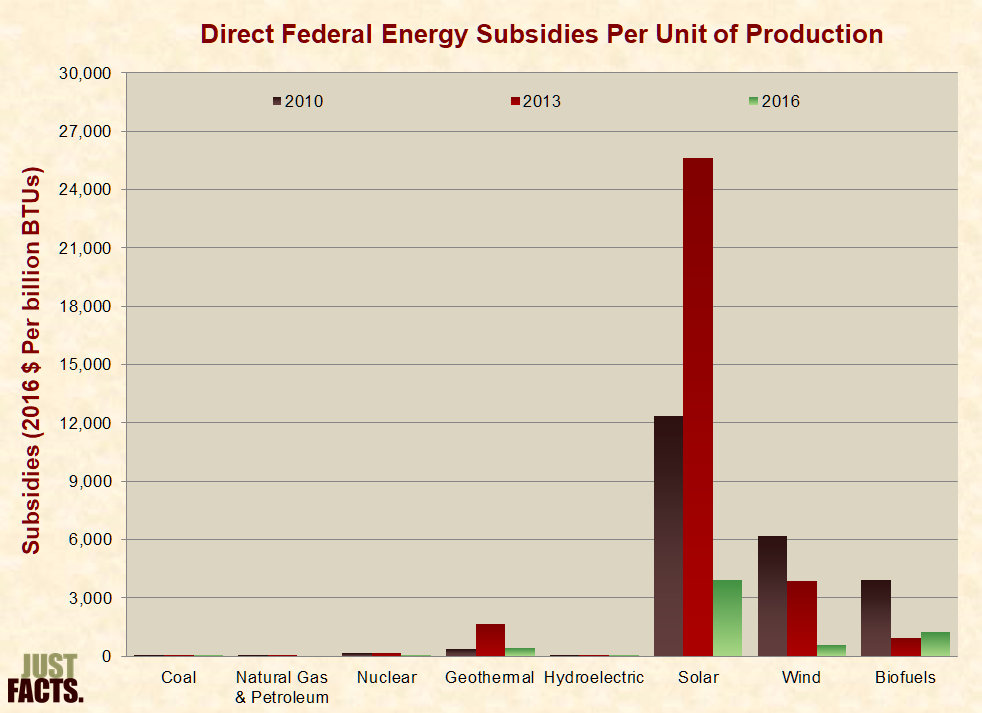 * Per EIA, there can be considerable lag times between subsidies and their effects on energy production. Thus, subsidies divided by production in any given year are not always representative of the larger picture. For example, many subsidies during 2007-2010 were provided to facilities still under construction as of 2011. Also, subsidies for research and development (R&D) of new technologies can take “many years” to yield results.[1007] However, EIA has noted that the outcomes of R&D subsidies are “inherently uncertain,” and:

To be continued…….
Email this author