Last week we introduced Part 1, which can be read HERE. This is a continuation of this in depth look at facts pertaining the energy.  These facts will hopefully make our debate over energy issues become ore fact-based and less emotionally based.)

Introductory Notes
In keeping with Just Facts’ Standards of Credibility, all graphs show the full range of available data, and all facts are cited based upon availability and relevance, not to slant results by singling out specific years that are different from others.

Pollutants
When modern energy is unavailable or expensive, people tend to burn more wood, crop waste, manure, and coal in open fires and simple home stoves. Open fires and home stoves do not burn fuel as efficiently as commercial energy technologies, and hence, they produce elevated levels of outdoor and indoor pollutants. The added consumption of wood also causes deforestation. [63] [64] [65] [66] [67]

* Assessing the full environmental impacts of different energy technologies requires looking beyond the effects at a single point of production, use, or disposal. To do this, researchers perform “life cycle assessments” or LCAs. Per the U.S. Environmental Protection Agency (EPA), LCAs allow for: the estimation of the cumulative environmental impacts resulting from all stages in the product life cycle, often including impacts not considered in more traditional analyses (e.g., raw material extraction, material transportation, ultimate product disposal, etc.). By including the impacts throughout the product life cycle, LCA provides a comprehensive view of the environmental aspects of the product or process and a more accurate picture of the true environmental trade-offs in product and process selection.[68] [69]

* Per a 2008 paper in Environmental Science & Technology:
Indeed, all anthropogenic [manmade] means of generating energy, including solar electric, create pollutants when their entire life cycle is taken into account. Life-cycle emissions result from using fossil-fuel-based energy to produce the materials for solar cells, modules, and systems, as well as directly from smelting, production, and manufacturing facilities. [70]

* Per the U.S. Department of Energy (2010):
While coal used to be a dirty fuel to burn, technology advances have helped to greatly improve air quality, especially in the last 20 years. Scientists have developed ways to capture the pollutants trapped in coal before they escape into the atmosphere. Today, technology can filter out 99 percent of the tiny particles and remove more than 95 percent of the acid rain pollutants in coal, and also help control mercury. [93] [94]
* In the U.S. from 1990 through 2015, sulfur dioxide (SO2) emissions per Btu of coal-generated energy decreased by 86%, and nitrogen oxides (NOx) emissions decreased by 78%. [95]
* Since the late 1970s, new automobiles have been equipped with catalytic converters, an “anti-pollution device” that converts “exhaust pollutants … to normal atmospheric gases such as nitrogen, carbon dioxide, and water.” [96] [97][98]
* Facts about air pollution levels and their effects are detailed in Just Facts’ research on pollution.

Greenhouse Gases
* Carbon dioxide (CO2) contributes more to the greenhouse effect than any other gas released by human activity.[99][100]
* In general:

* Biofuels such as ethanol generate CO2 when burned, but the crops used to make these fuels absorb an equal amount of CO2 as they grow. However, planting, fertilizing, harvesting, processing, and distributing ethanol emits more CO2 than extracting, refining, and distributing gasoline.[111] [112] [113] [114] [115]
* Per the U.S. Congressional Budget Office (CBO), lifecycle analyses comparing CO2 emissions of corn-based ethanol and gasoline have produced varying results, but the most authoritative study in the eyes of the federal government (conducted by Argonne National Laboratory) estimates that, on average, corn-based ethanol produces about 20% less CO2 than gasoline.[116]
* Another type of biofuel called cellulosic ethanol has the potential to produce 60-95% less CO2 emissions than gasoline. This fuel is more difficult to manufacture than regular ethanol, and as of 2016, producers have been unable to make enough of it to meet the mandated amounts specified in federal law.[117] [118] [119] [120][121] [122] [123]
* Converting undeveloped land to cultivate crops for biofuels creates CO2 emissions because existing plant life is removed and the soil is disrupted. If this land is repeatedly used to produce biofuels, the net CO2 emissions will be less than using fossil fuels. The timeframe until this breakeven point occurs depends upon factors such as the type of land converted and type of biofuel produced. Per a 2008 paper in the journal Science, the CO2 breakeven time of converting:

* Per the U.S. Energy Information Administration:

Most of the biodiesel produced in the United States is made from soybean oil. Some biodiesel is also produced from used oils or fats, including recycled restaurant grease. In some parts of the world, large areas of natural vegetation and forests have been cleared and burned to grow soybeans and palm oil trees to make biodiesel. The negative environmental impacts of land clearing may be greater than any potential benefits of using biodiesel produced from soybeans and palm oil trees.[125]

* Facts about greenhouse gases and climate change are detailed in Just Facts’ research on global warming.
* In order to perform useful work, energy usually must be converted from one form to another. Most energy on earth ultimately comes from the sun, and this energy typically undergoes multiple conversions before it is used to accomplish a particular task. For example, the energy that ultimately powers a light bulb may have the following history:

* With each conversion process, some amount of the energy is dispersed, thus making it less useful for performing work. Per the U.S. National Academy of Sciences:
Every time energy changes forms, some portion is “lost.” It doesn’t disappear, of course. In nature, energy is always conserved. That is, there is exactly as much of it around after something happens as there was before. But with each change, some amount of the original energy turns into forms we don’t want or can’t use, typically as so-called waste heat that is so diffuse it can’t be captured.
Reducing the amount lost – also known as increasing efficiency – is as important to our energy future as finding new sources because gigantic amounts of energy are lost every minute of every day in conversions.[128] [129] [130] [131]

* In the U.S. from 1949 to 2015, energy consumption per inflation-adjusted dollar of economic output decreased by 63%: 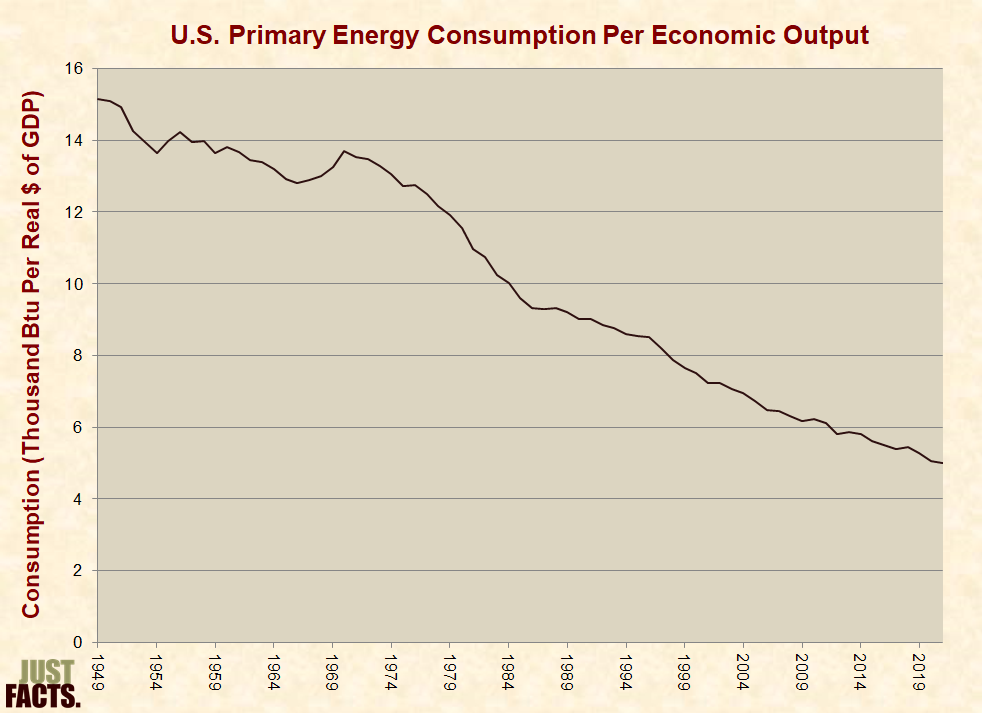 * Homes built in the U.S. from 2000-2009 are about 30% larger than homes built prior to this period, but they use about 2% more total energy. This result is primarily due to better insulation and increased efficiencies of heating and air conditioning technologies.[133]
* Homes built in the U.S. from 2000-2009 use about 18% more energy on appliances, electronics, and lighting than older homes.[134] This is because newer homes are more likely to have “dishwashers, clothes washers, clothes dryers, and two or more refrigerators.” Also, because they have more square footage, newer homes tend to have more “computers, TVs, and TV peripherals such as digital video recorders (DVRs) and video game systems.”[135]

* Increasing the efficiency of electronics, appliances, and lighting reduce the demand for energy and can save consumers money if the added cost of making these products more efficient does not exceed the cost of the energy saved.[136] [137]* Energy Star is a joint program of the U.S. Environmental Protection Agency and Department of Energy. Per the program’s website:
If looking for new household products, look for ones that have earned the Energy Star. They meet strict energy efficiency guidelines set by the EPA and US Department of Energy.[138]
* In 2010, the U.S. Government Accountability Office (GAO) published an investigation of Energy Star in which GAO submitted 20 “bogus products” for approval. Fifteen of the products were approved, 2 were rejected, and 3 were unanswered at the time the report was published. Among the products certified as Energy Star compliant were:

* The U.S. Green Building Council, per its website, is a “nonprofit organization committed to a prosperous and sustainable future for our nation through cost-efficient and energy-saving green buildings.”[140] This organization provides various types of green building certifications that qualify the owners for government incentives, such as tax breaks and zoning allowances. This rating system is named LEED for “Leadership in Energy and Environmental Design.”[141]
* In 2012, USA Today conducted an investigation of schools with green building certifications (such as LEED) and found:

* Per the U.S. National Academy of Sciences:
Another familiar form of conversion loss occurs in a vehicle’s internal combustion engine. The chemical energy in the gasoline is converted to heat energy, which provides pressure on the pistons. That mechanical energy is then transferred to the wheels, increasing the vehicle’s kinetic energy. Even with a host of modern improvements, current vehicles use only about 20% of the energy content of the fuel as power, with the rest wasted as heat.
Electric motors typically have much higher efficiency ratings. But the rating only describes how much of the electricity input they turn into power; it does not reflect how much of the original, primary energy is lost in generating the electricity in the first place and then getting it to the motor.
Efficiencies of heat engines can be improved further, but only to a degree. Principles of physics place upper limits on how efficient they can be. Still, efforts are being made to capture more of the energy that is lost and to make use of it. This already happens in vehicles in the winter months, when heat loss is captured and used to warm the interior for passengers.[143] [144]

* Transportation fuels have different energy densities, and thus, the price per volume of each fuel does not accurately reflect the energy supplied to consumers. For example, the energy content of a gallon of ethanol is 31% less than a gallon of gasoline. Hence, a car fueled with E85 (a mixture of 70-85% ethanol and 15-30% gasoline) will get 25-30% less miles per gallon than the same car when it is fueled with pure gasoline.[145] [146] [147] [148] [149]
* Like ethanol, the volume of biodiesel blended with regular diesel is shown by a number that follows the first letter of the named fuel. Thus, B20 contains 20% biodiesel and 80% regular diesel.[150]
* On an energy-equivalent basis, the average subsidized retail prices (including taxes) for transportation fuels during 2015 were as follows:

* A federal law known as the “Renewable Fuel Standard” requires U.S. consumers to use certain amounts of ethanol and other biofuels. This mandate uses a compliance mechanism that transfers some of the costs of producing these fuels from biofuel companies to petroleum companies. These added costs are then passed on to consumers in the form of higher gas prices.[152] [153] [154] [155]
* During 2015, a federal tax credit subsidized biodiesel at a rate of $1.00 per gallon.[156]
* Federal payments, tax breaks, loans, and loan guarantees subsidize petroleum and natural gas production at a rate of about $0.01 per gasoline-gallon equivalent.[157]
* Combining the data above yields the following average prices for transportation fuels during 2015 without federal subsidies:

To be continued…
Email this author