(This is the third in a series that brings to the reader some basic facts about energy so that he/she can better understand the raging debate over energy supplies and environmental stewardship.)
Costs of Electricity
From 1929 to 1967, the inflation-adjusted average price of electricity for U.S. residential customers declined from about 60 cents per kilowatt hour to 10 cents, and it stayed roughly around this figure through 2012.[159]
* The inflation-adjusted average prices of electricity since 2004 for all U.S. consumers and the four major energy sectors are shown in the graph below: 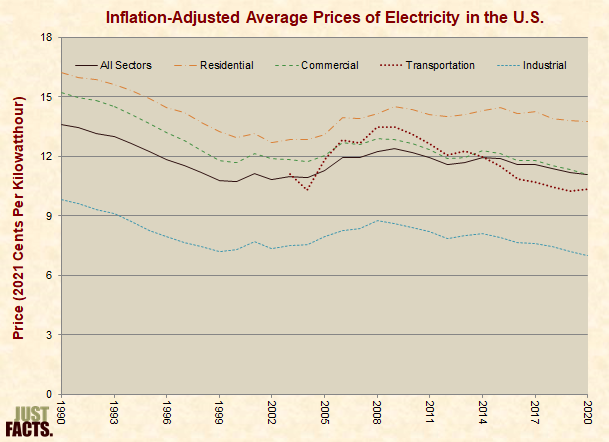 * Demand for electricity varies on an hourly, daily, and seasonal basis due to factors such as: 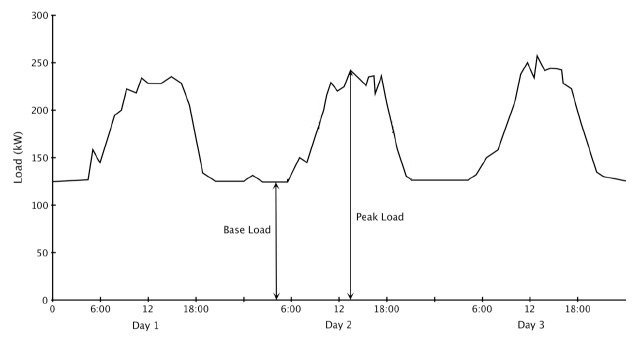 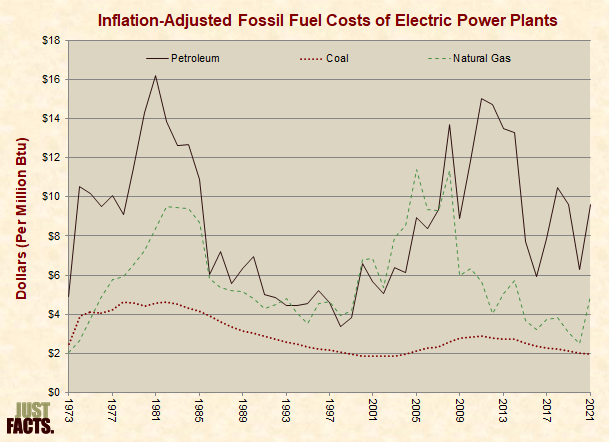 Forecast the demand for electricity at the time of the peak, and then identify existing and potential generating resources needed to satisfy that demand, plus enough additional resources to provide a comfortable reserve margin. The goal is to minimize the costs associated with new capacity investments while ensuring reliability for customers.[186] [187] [188]
Determining which electricity-generating technologies will provide the lowest cost while maintaining reliability is complicated by the following factors:

* A commonly cited measure of the costs of building and operating new power plants is the “levelized cost” data published by EIA. Levelized costs reflect “both the capital and operating costs of deploying and running new utility-scale generation capacity of any given type.”[203] [204] Per EIA:

They vary with EIA’s assumptions:

In 2015, EIA projected the following levelized costs for plants that begin generating electricity in 2020:

* Per EIA, “a better assessment of economic competitiveness can be gained through consideration of avoided cost, a measure of what it would cost the grid to generate the electricity that is otherwise displaced by a new generation project, as well as its levelized cost.” Calculating these costs involves a greater degree of complication than levelized costs.[234] [235]
* In July 2013, EIA published a preliminary discussion paper using avoided costs and levelized costs to compare the projected 2018 and 2035 values of advanced combined cycle natural gas (Adv CC), onshore wind, and PV solar with different subsidies given to wind and solar.[236] Because there is significant variability in factors that affect electricity costs and values in different regions of the country, the paper contained assessments of 22 regions within the U.S. electricity system. It found that without subsidies for wind and with a 10% investment tax credit for solar:

* The following features, caveats, and limitations are inherent in this analysis:

It does not provide a comprehensive projection of future costs, because it estimates the cost of building and operating one new power plant of each technology. Beyond that, the prices of geothermal, wind, and hydropower are subject to change.[243]