(This is part XI of this series on energy. We hope it helps the reader better understand the issues facing our country and our state as we endeavor to tackle the problem of providing our citizens and our businesses with their energy needs.)

* From 2007 to 2012, companies in the S.&P. 500 paid an average of 29% in federal, state, local, and foreign corporate income taxes.[1016] [1017] Among large oil companies in the S.&P. 500, the average corporate income tax rate was 37%.[1018]
* The burden of corporate income taxes falls upon: (1) business owners in the form of decreased profits, (2) workers in the form of reduced wages, and (3) possibly consumers in the form of higher prices.[1019] [1020]
* The Congressional Budget Office (CBO) estimates that 75% of corporate income taxes are borne by owners/stockholders and 25% are borne by workers.[1021] Other creditable sources estimate that owners/stockholders bear anywhere from 33% to 100% of this tax burden.[1022] For more detail, see Just Facts’ research on tax distribution.
* Excise taxes are similar to sales taxes, except that they are imposed on specific goods and services.[1023] [1024]
* In addition to raising government revenue, excise taxes are sometimes levied to discourage or penalize certain activities.[1025] [1026] [1027] Per the U.S. Energy Information Administration:

Energy excise taxes are disincentives to the production and consumption of the fuels on which they are levied. Excise taxes increase fuel prices and reduce volumes consumed.[1028]

* In 2003, the federal government collected about $35 billion in energy-related excise taxes.[1030] This equates to 5% of all energy expenditures in the U.S. that year.[1031]
* The economic burden of excise taxes primarily falls on retail customers in the form of higher prices. Per the Congressional Budget Office:

The effect of excise taxes, relative to income, is greatest for lower-income households, which tend to spend a greater proportion of their income on such goods as gasoline, alcohol, and tobacco, which are subject to excise taxes.[1032] [1033] [1034] [1035]

* Regulatory costs for hydroelectric power plants increased from 5% of the total costs of generating hydroelectricity in 1980 to 25-30% of the costs in 2010.[1044] [1045] [1046]
* Regulations on the sulfur content of diesel fuel have played a role in raising the price of diesel above that of gasoline.[1047]
* Regulation of hydropower plants has sometimes reduced output from wind farms.[1048]
* During a January 2008 interview with the San Francisco Chronicle, Barack Obama stated:

Let me sort of describe my overall policy. What I’ve said is that we would put a [greenhouse gas] cap-and-trade system in place that is as aggressive, if not more aggressive, than anybody else’s out there. …
[U]nder my plan of a cap and trade system, electricity rates would necessarily skyrocket, regardless of what I say about whether coal is good or bad, because I’m capping greenhouse gasses: coal power plants, natural gas, you name it, whatever the plants were, whatever the industry was, they would have to retrofit their operations. That will cost money. They will pass that money on to consumers.[1049]

* In June of 2009, the U.S. House of Representatives passed a bill that would have capped most sources of greenhouse gas emissions in the U.S. at 17% below 2005 levels by 2020 and at 83% below 2005 levels by 2050.[1050] This bill passed the House by a vote of 219-212, with 82% of Democrats voting for it and 94% of Republicans voting against it.[1051] The bill was then forwarded to the Senate and never voted upon.[1052]
* In December of 2009, the Obama administration Environmental Protection Agency (EPA) issued a finding that greenhouse gases “threaten the public health and welfare of current and future generations.” This finding allows the EPA to regulate greenhouse gases under the Clean Air Act.[1053] [1054]
* In May of 2013, the Obama administration made a regulatory decision that a metric ton of carbon dioxide (CO2) has a “social cost” of $38. This figure is used by EPA and other agencies under the authority of the President to assess and justify regulations on greenhouse gases.[1055] [1056] [1057]
* Per EIA projections made in 2013, a CO2 tax of $25 per metric ton that begins in 2014 and grows to $37 in 2022 would increase gasoline prices by 11% and electricity prices by 30% in 2022. These increases are relative to a situation in which no government greenhouse gas reduction policies are enacted and “market investment decisions are not altered in anticipation of such a policy.”[1058]
* The U.S. Department of the Interior (DOI), which is under the authority of the President, manages 500 million acres or about one fifth of all U.S. surface land and more than three times as much acreage in offshore areas. DOI leases some of these lands for energy projects such as oil drilling and solar energy facilities.[1059] [1060] [1061]
* From 2003 through 2014, energy from fossil fuels produced on federal and American Indian lands declined by 20%, and the portion of U.S. energy from fossil fuels produced on these lands declined by 35%: 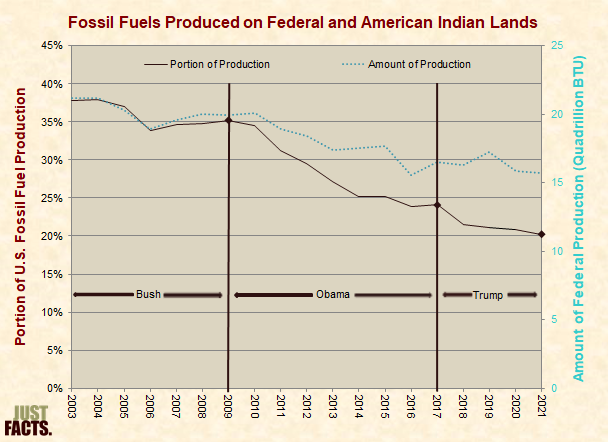 * In November 2013, the Associated Press reported that the Obama administration:

for the first time has enforced environmental laws protecting birds against wind energy facilities, winning a $1 million settlement from a power company that pleaded guilty to killing 14 eagles and 149 other birds at two Wyoming wind farms.[1066]

* In December of 2013, the Obama administration issued a regulation that allows it to give permits to wind farms to accidentally kill eagles for periods of up to 30 years.[1067]
* In June 2014, the Obama administration gave a permit to a California wind farm that allows it to kill up to five golden eagles over five years.[1068]
…………….To Be Continued………………….