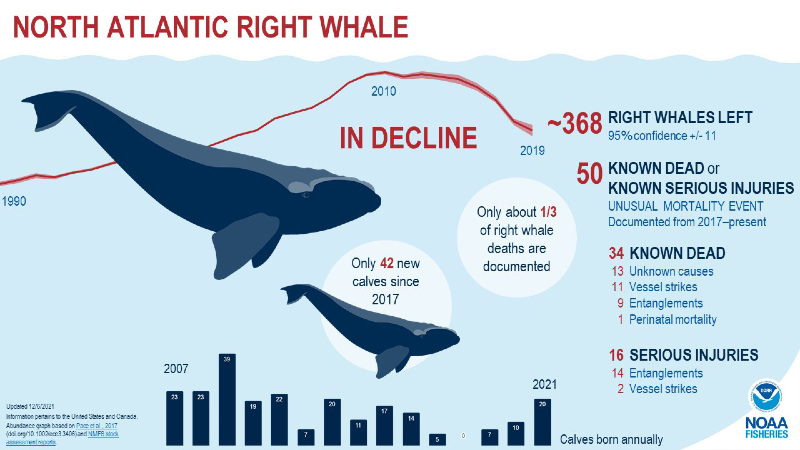 Secrecy abounds around the monster offshore wind (OSW) project proposed by Dominion Energy. In this case it is all about the threat to the severely endangered North Atlantic Right Whales.

I earlier reported on the big hidden whale study done by the US Bureau of Ocean Energy Management (BOEM), which is doing the Environment Impact Assessment for this huge project.

Digging into Dominion’s filing with BOEM I found something even worse. Dominion has done an actual threat assessment but it is 100% secret! This is outrageous.

Here is a bit of background so folks can dig for themselves. There is a lot to look at.

BOEM has a separate website on this monster OSW project, which would be one of the world’s largest. The project is titled Costal Virginia Offshore Wind or CVOW. Dominion has submitted a large set of documents in what is called the Construction and Operations Plan or simply the COP.

The COP is here.

There is a long main report plus 32 technical appendices. My endangered whales interest was immediately drawn to “Appendix R: Threatened and Endangered Species Review”.   It is here.

I expected to get a discussion of the potential threats the project poses to the severely endangered North Atlantic Right Whale and what Dominion might do to minimize the adverse impact. I should also learn what other threatened and endangered species are involved, right?

Instead, I just got a cover page bearing this notice: “Proprietary and Confidential Business Information Exempt from Public Disclosure“.

That is all there is to Appendix R. It is 100% secret. Even the number of pages is not disclosed, as it is with the other Appendices, that one can actually read.

So the huge question is”What’s the secret?” What is so secret that every word has to be kept from the public?

It cannot be the details of project construction and operation, because these are abundant in other Appendices. Nor that there are risks to others. The very next, Appendix S, is Navigation Safety Risk Assessment. There are 225 public pages there.

My guess is that it says there are real risks to the Right Whales, maybe to other species too. Of course there is nothing proprietary or business confidential about this sort of analysis. In fact it is central to public policy making.

That this assessment is kept secret is outrageous all by itself, but it also raises a much deeper issue. Will the BOEM Environmental Impact Assessment also include secret science?

BOEM is currently doing a draft EIA, scheduled to come out this December. Agencies are not allowed to disclose proprietary and confidential business information. Will BOEM ignore Appendix R, or even worse use it without disclosing it? The same is true of their secret, million-dollar study of Right Whale migration. Migration behavior is central to OSW risk assessment.

Speaking of migration behavior, I got some truly valuable data from a prominent whale watching and advocacy group. They say “As for your question regarding migrations, there is a great online resource which documents surveyed and opportunistic sightings and acoustical detections of right whales called WhaleMap https://whalemap.org/WhaleMap/. In general, a subset of the population, including pregnant females, migrates to the calving area in Southeast US around November and move back to northern waters in the spring. However, there are acoustic detections in the mid-Atlantic waters year-round and not all right whales migrate. To make things more complicated, some whales have migrated to the Southeast US, returned to the northeast waters, and then back to the southeast within the same calving season.”

So it looks like Right Whale migration is complex stuff. It is like this with some birds, blue jays for example. Maybe this is what BOEM found and does not want to release. After all, their middle name us “Ocean Energy” so they are all for this monster project.

Speaking of bias I am somewhat skeptical of Dominion’s secret assessment. It was done by a heavy duty engineering group named Tetra Tech Inc.

Since all the impact assessment to date seems to have been done secretly by proponents of the project, I expect the first draft EIA to be pretty poor when it comes to protecting the whales. Hopefully defenders of the whales will rise to the occasion.

Save the whales from OSW!

Dr. David Wojick is a civil engineer and cognitive scientist and a Visiting Fellow with the Thomas Jefferson Institute for Public Policy.  He may be reached at info@thomasjeffersoninst.org.