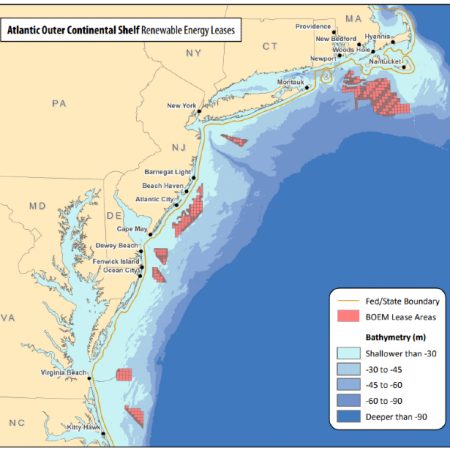 A group of Nantucket Island, Massachusetts residents have filed suit challenging the pre-construction environmental review on a massive offshore wind complex planned off its shores. The issues raised may have a direct impact on the similar wind energy project planned off Virginia Beach, which is only now beginning its environmental impact process.

A loose coalition of offshore wind opponents is forming from North Carolina to New England to the Great Lakes to question or challenge the expanding list of proposed projects. The Thomas Jefferson Institute for Public Policy has affiliated with the coalition, with our concerns over Dominion Energy Virginia’s proposed 5,280 megawatt project basically economic.

One of the key organizers of the broad coalition and this Nantucket lawsuit, David Stevenson of the Caesar Rodney Institute in Delaware, will be speaking at the Virginia Energy Consumer Conference on September 16 outside Richmond. Thomas Jefferson Institute is one of the three sponsors. The full conference will be available through streaming (details to follow.)

The umbrella group is using the name “Coalition for Ocean Protection and Safety.” The Nantucket group, playing off the code designation for its local airport, call themselves ACK RATS, with the RATS standing for Residents Against Turbines. The wind developments there are not 27 miles offshore the way it is planned in Virginia.

“While those are all valid and true concerns, what motivates us in our opposition to the industrial offshore development is the fact that it will result in the destruction of our ocean floor, its ecosystem, and have a deadly impact to countless bugs, birds, bats, fish, and the critically endangered North Atlantic Right Whale. Saving those species, and especially the critically endangered Right Whale is why we are here today,” Oliver continued.

“The whales belong to all of us and with fewer than 400, of which there are fewer than 100 breeding females left, each one is worth protecting. The people of Nantucket have a long history with these whales, and we have done so much recently to protect this species. It would be a tragedy to see all of them lost in order to build an industrial offshore development,” stated Mary Chalke, co-founder of ACK Rats.

With its Environmental Impact Statement (EIS) still in the early stage, the Dominion project already has the enthusiastic endorsement of the Biden Administration, Virginia Governor Ralph Northam and the Democrats in control of the General Assembly. Threats to any whales probably won’t shake that. But if the Vineyard Wind EIS fails a federal court review because it was rushed and flawed, that likely will add roadblocks to the Virginia project.

The suit challenges the Bureau of Ocean Energy Management (BOEM) as having failed to comply with the National Environmental Policy Act and the Endangered Species Act.

The suit reads like and cites complaints similar to those in legal challenges to natural gas pipeline projects in Virginia, some of the projects now abandoned. Any successful federal court precedents established in those cases on reversing permit approvals may apply here.

Vineyard Wind LLC submitted a construction and operation plan to BOEM in 2017, seeking to erect 100 turbines about fourteen miles offshore from Nantucket and neighboring Martha’s Vineyard. Plans are in place to expand to other adjoining lease areas and build a total of 600 650-foot-tall turbines in that region.

The Dominion project, which Wednesday announced its formal lease of Port of Virginia space to use as a staging area, plans to produce 2,600 megawatts of energy from its first phase. Massive world-wide economic forces are behind this push, most of them positioned to earn substantial profits from energy ratepayers.

The Virginia State Corporation Commission, basically under orders from the General Assembly to approve the offshore wind proposed by Dominion, has estimated the all-in consumer cost of the Dominion project at more than $37 billion. It accounts for about a third of the $807 annual increase in residential electric bills the SCC has projected by 2030, with the power provided dependent on unreliable wind.

The five-turbine, 30 megawatt Block Island wind project off Rhode Island currently has four of its five turbines off-line as the manufacturer inspects for the kind of stress fractures which are appearing in similar units in Europe. Block Island has been operational on windy days since 2016, but recently the turbines were remaining still on those windy days and some newspaper finally asked why.