My last essay, “Runaway Costs and Hospital Monopolies,” discussed the fact that Virginians who get their health insurance at work and through the Affordable Care Act website pay the highest premiums in the country. We traced those costs to a number of sources, including the Certificate of Public Need (COPN), Virginia Department of Health (VDH) protection of regional monopolies through its administration of COPN, hospitals acting like monopolies without oversight, and the increasing integration of health insurers and monopoly providers in Virginia’s largest markets.

COPN is the most spectacular example of rent seeking in Virginia history. By the early 1970’s, African-American hospitals had closed because Federal equal-access laws desegregated white hospitals. Black surgeons were looking to open viable practices. The General Assembly enacted COPN in 1973 as a parallel effort by a segregationist Democratic leadership to exclude black doctors and by white hospitals to exclude new competitors of any color. It worked.

The biggest trend in surgery continues to be the migration of surgery from inpatient to outpatient settings. So, if hospitals can’t buy physician practices, they neuter them with a combination of COPN and hyper-aggressive leverage of their regional monopolies and integrated networks, including the ownership of health plans.

The spreadsheet below shows the worst bills, their sponsors and donations by healthcare interests to their campaigns. 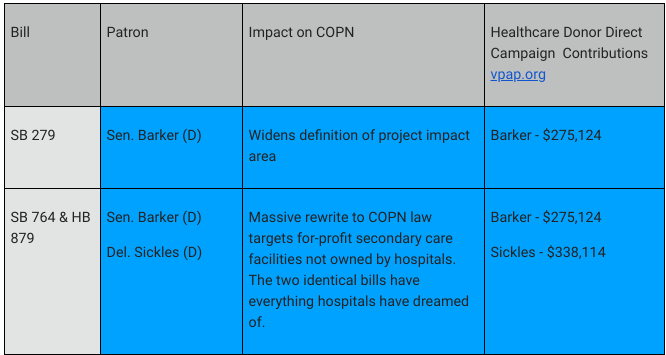 Not shown in the donation numbers are the massive contributions by the same interests to Democratic PACs that passed it on to these campaigns. Hospitals give similar amounts to Republicans, but Republicans in general do not return the favor with such legislation.

Sen. George Barker, D-Alexandria, is on the Senate Commerce (Health Insurance) and Labor Committee, the Education and Health Committee, the Finance and Appropriations Committee and the Joint Commission on Healthcare – a clean sweep for shepherding his legislation. For 30 years he worked for and ran the Health Systems Agency of Northern Virginia, the gatekeeper for COPN applications that makes recommendations to VDH on the disposition of those applications. He is currently a consultant.

Del. Mark Sickles, D-Alexandria, is the new chairman of the House Health, Welfare and Institutions Committee and Vice Chair of the House Appropriations Committee. Sickles’ Senior Advisor for Policy is Donald Harris. Mr. Harris retired from Inova as its chief lobbyist.

The bills are couched in language that will allow the patrons to claim that they are designed to increase access to intermediate care to poor people by requiring such facilities to care for indigent and Medicaid patients. In truth, they will result in the closing of many of the few existing intermediate care facilities not owned by hospitals and ensure that few independent physicians ever again apply for a certificate. Virginia nation-leading hospital operating margins will expand again as will the costs of government, commercial and workmen’s’ compensation, health insurance and co-pays.
Hospital-owned ambulatory surgery centers (ASCs) and imagery centers get paid far more than independent ones by both government and private insurers. Additional facts:
▪       These bills make the charity care requirement apply to ambulatory care facilities, including existing ones. That provision will have no practical effect on hospital-owned facilities.
▪       Most of Virginia’s intermediate-care facilities are structured as taxable partnerships or LLCs. Neither of those corporate structures is able to deduct from its taxes charitable services provided to indigent patients or losses incurred in treating Medicaid patients.
▪       Many hospital-owned surgery and imagery centers, including Northern Virginia stalwarts Inova Ambulatory Surgery Center at Lorton, Inova Surgery Center at Franconia-Springfield and others, provided no charity care in 2018. They are taxable partnerships owned by a tax exempt health system.
▪       Patients can’t report to a secondary care facility without a referral. Many of the doctors in the employ of integrated health systems are expected to refer within those systems and to refer for indigent and government insured patients for ambulatory services and procedures to their hospitals, not their outpatient centers.
▪       Barker and Sickles’ bills also
1.     define a new state board to write a multi-year plan for health services facilities dominated by incumbents and
2.     Extend to ASCs a tax that hospitals volunteered to pay to secure the massive additional profits hospitals will get Medicaid expansion.

The outcome: no change for hospital systems and huge new burdens on their secondary-care competitors.

The General Assembly, if it cares about either the appearance of internal corruption or the budgets of their constituents, will legislate that no members serving on any committee including appropriations can accept donations either directly or through party PACs from interests benefiting financially from bills brought before those committees.  Those who have accepted more than $100,000 in their careers could serve on the committees but could not vote on any legislation that would benefit their donors.

This annotated version of the Sickles/Barker bill will offer readers a glimpse into how complex, restrictive and utterly subjective COPN law is. I hope my footnote commentary proves a useful guide.
A version of this commentary originally appeared in the online Bacon’s Rebellion on January 24, 2020.